The Manipuri Documentary film of 52 minutes duration, directed by Amar Maibam, was among the eight films selected out of as many as 1,780 film entries from 112 countries for the festival. 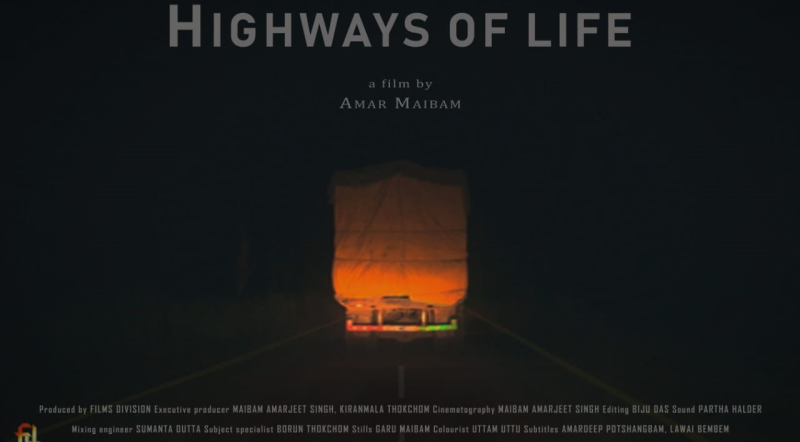 Manipuri documentary film Highways of Life was adjudged the Best Film among eight films that competed in the international competition section of the 8th Liberation DocFest Bangladesh that concluded Saturday.

The film of 52 minutes duration is directed by Amar Maibam and produced by Films Division.

'Highways of Life' from Manipur bagged the Best Film Award in the international competition section for which only eight films were selected out of as many as 1,780 film entries from 112 countries for the festival.

The seven others in the international competition section are No Man’s Land by Charlotte Muller from Belgium, Our Territory by Mathieu Volpe from Belgium, A Long Journey for the First Steps by Jasmina Mustafic and Ratko Stojiljkovic from Slovenia, Oro Blanca by Gisela Carbajal Rodriguez, Who is Europe?by IanMcDonald from UK, Galena by Ezzatollah Parvazeh from Iran and Butterflies in Berlin-Diary of a Soul split in two’ by Monica Manganelli from Italy-Germany.

Providing a detailed look at the high octane lives of Manipur’s highway truckers, the film follows a group of truckers as they manoeuvre through the highways, putting their lives on the frontline, ferrying essential commodities to serve the people of Manipur.

Director and cinematographer of the film, Amar Maibam himself is a highway bus conductor-turned filmmaker. He started his career in film making as an assistant to his late filmmaker father MA Singh, who is a pioneer of Manipuri Cinema.