Putting livelihood their top priority and by strictly following the Covid-19 guidelines and appropriate behavior while on duty, artisans and weavers continue to perform their work progressively. 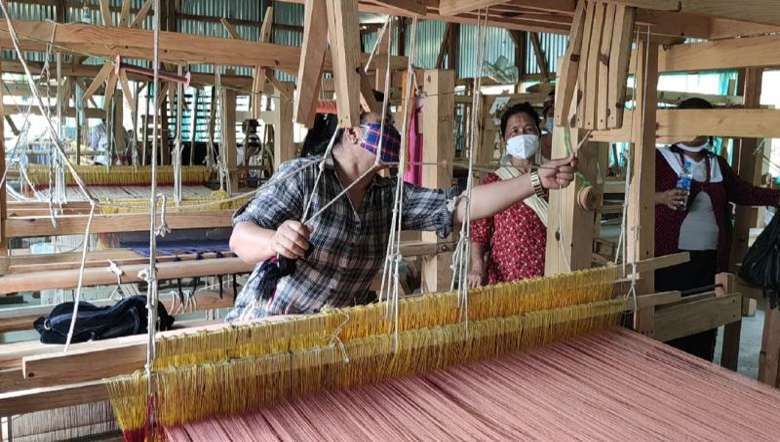 Effective implementation of cooperative societies is needed to strengthen the socio-economy of a state. However, the cooperative movement that began in India way back in 1904 is long forgotten today, particularly in Manipur which is witnessing the death of cooperative societies. The situation is made worse as the socio-economy of the countries the world over is hit hard by the Covid-19 pandemic. However, undeterred by the hard times brought about by the pandemic, a handloom and handicraft cooperative society in the state has been running full steam with thousands of dedicated indigenous artisans and weavers setting an exemplary way of surviving the pandemic, while drawing the government’s attention to the need of reviving the cooperative movement in the state.

While thousands of people are rendered jobless and struggling to find new means of livelihood to survive amid the pandemic, life goes on as usual for artisans and weavers working at several outlets of Renu Handloom and Handicraft Cooperative Society without having to face any job insecurity till date. The cooperative society was founded by Renu Arambam, a recipient of Laxman Rao Inamdar Cooperative Excellence Award 2017.

Speaking exclusively to the Imphal Free Press, Renu Arambam told this reporter that coming from a poverty-stricken background, her desire is to empower every economically deprived woman of the society. She wanted to generate jobs for the people. She also expressed concern about the survival of the workers during this pandemic time.

"Like how the government is dealing or trying to bring the pandemic situation under control, I have serious concern for my workers. I think about my weavers, how they will survive if they didn't work during this pandemic. With this very thought, we have been working even during the pandemic," she maintained.

No doubt, there is a prevailing fear among the workers. They fear contracting the disease amid the Covid-19 second wave in the state. However, the dedicated artisans and weavers continue to carry on with their work and keep the cooperative society alive. Putting livelihood their top priority and by strictly following the Covid-19 guidelines and appropriate behavior while on duty, they continue to perform their work progressively.

The artisans and weavers have been carrying out their work by maintaining the standard operating procedure (SOP) and they strongly believe that following the guidelines has helped them survive the pandemic.

Expressing hope of better times ahead, the founder of the cooperative society said that whatever items they had crafted or produced during this pandemic can be sold out once the situation gets better. Nothing is lost in continuing to work, she said, adding that the workers can continue their work as the required raw materials are in stock.

While speaking to IFP, Renu recalled the hardship she endured to witness the growth of Renu Handloom and Handicraft Cooperative Society that was started in 1992.  She did not pursue any formal education, except a few months of training in embroidery. She, however, decided to set up the society with a humble investment of just Rs 18,000.

The society was registered in the year 1992 under the Manipur Co-operative Societies Act 1976 with 110 members. Since then, there has been no looking back.

Today, the society has set up 47 working centres with over 4,700 employees in several districts of the state, both in the hills and the valley, she said. The society has reached a level where more than 4000 weavers and artisan from various parts of the state irrespective of hill and valley are provided jobs, she added.

When asked how the cooperative society is functioning, Renu said the society doesn't get any support from the state government, except taking one loan from the cooperative department when setting up the society. But her venture has been successful. Today, her customers include not only buyers from other parts of the country but also from foreign countries.

One of the staff, Chongcy Lotzem, who is working in the centre at Motbung said that this work shed has been functioning since the last three years. With the installation of 40 looms, around 50 weavers are working currently. Despite the shutdown and restrictions, they manage to continue working regularly by staying in the hostel which is attached to the work shed. Besides this, there is also one old age home within the campus under the care of the society.

"As most of the people coming to work in this workshed are deprived or underprivileged women and economically weaker sections of the society. We are not afraid of this dreaded Coronavirus but we do worry about our daily basic needs of survival such as food and other essential items," Lotzem said.

Without getting any support from any quarters, Renu Handloom and Handicraft Cooperative Society has been running successfully. The workers have been working with complete dedication. Not a single day did they stop working despite the pandemic problems faced by the state, she said.

"If the government is committed enough in providing support and promoting women empowerment, we deserve to get at least some support from the government," she added, while drawing the state government’s attention to their hard work.

Also, drawing the attention of the state government to the Integrated Cooperative Development Project (ICDP) established under the National Cooperative Development Corporation, Renu said that cancelling the scheme since 2004 was a huge setback to people who are working in a cooperative society with dedication and devotion. In a state like Manipur where the socio-economy is still lagging behind several states, there is an urgent need of strengthening the cooperative movement. For this, the state government must set up a proper mechanism to implement ICDC projects in the state.

"When I was honoured with the NCDC co-operative excellence award in 2012 and the Laxman Rao Inamdar Cooperative Excellence Award in 2017, I felt that the state could receive the ICDC scheme as recognition of my achievement. But unfortunately, the state has not shown keen interest in reviving it," she stated.

Renu also said that with the advent of powerloom in many parts of the country, handloom weavers face several challenges.

With the help of powerloom, other states have started producing traditional clothes of Manipur. Some are even imported in the state. Such instances really disheartened indigenous weavers of the state, she said.