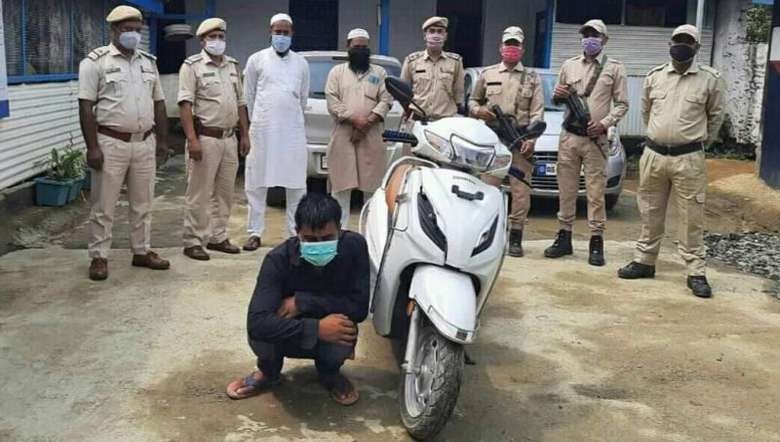 As per police sources, a reliable information was received by Thoubal District Police on Monday that one vehicle lifter namely Singamayum Farid Khan, 31, son of Singamayum Abdul Salam  of Lilong Atoukhong was loitering at his residence with concealing one stolen vehicle. Soon after, a team of Lilong PS led by OC, inspector Md Riaj Khan, including women police under the supervision of SP of Thoubal, S Ibomcha along with the members of ANJUMAN Lilong raided the house, the source added.

During the operation, Farid Khan was arrested along with one Honda Activa (white colour) bearing no registration number and a sum of Rs 70,000.

On further examination, Farid stated that he along with his associate Singamayum Imran Khan, 26, son of Singamayum Riaj Khan of Lilong Atoukhong had stolen the said vehicle from a Ghari Mamang Leikai, in front of Lingel office near Mahindra Showroom on April 30 last at around 2:45 pm. The accused Singamayum Imran Khan is still absconding, the source informed.

A case has been registered against the accused persons and further investigation is going on.

Meanwhile, a team of Thoubal commando while conducting frisking and checking at Somrei along Yairipok-Kasom road apprehended one person namely Shamurailatpam Rishikumar Sharma, 28, son of Sh Nobendro Sharma of Old Checkon along with 58 cartons of mosquito coils of foreign origin (Godzilla). He was found carrying the mosquito coils in a Bolero (Whie colour) with no registration number. The apprehended person along with the seized items would be handed over to the superintendent of Custum Preventive Force, Pallel by observing necessary formalities, the source added.

On Sunday, a team of Khongjom Police Station led by ASI N Ramaswami Singh conducted a special liquor drive in and around Khongjom Bazaar area under the supervision of its OC, inspector K Santosh. During the drive, 10 litre of DIC liquors were seized from Maibam Athoi Singh, 38, son of (Late) M Maipak Singh of Khongjom Mamang Leikai and Mutum Henari Singh, 43, son of (Late) M Samkesho Singh of Khongjom Mamang Leikai. The liquor sellers were apprehended and handed over to Excise Station along with the seized items after being brought to Khongjom PS, it added.