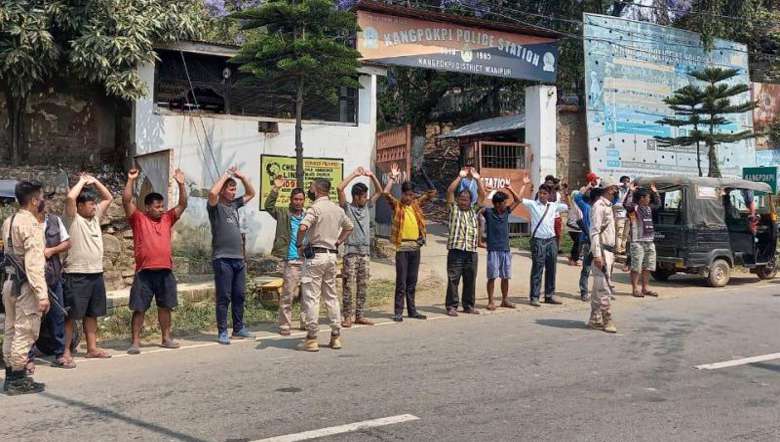 In view of the alarming surge of infection in the district, Kangpokpi police have geared up in enforcing Covid appropriate behaviours since Wednesday.

With the strict enforcement of SOPs, the numbers of trekkers are reportedly minimised while those halting at the peak were also mostly scaling down. Meanwhile, the newly posted officer-in-charge of Kangpokpi Police Station, inspector Henminthang Kipgen immediately embarked on checking violators of Covid appropriate behaviours in Kangpokpi town on Thursday.

A police team led by the OC Kangpokpi detained people coming out without wearing masks and released them later with strict warning of appropriate action if they continued to defy the Covid appropriate behaviours .

The officer-in-charge of Kangpokpi Police Station also spread awareness with his team about the SOPs and guidelines and exhorted the people to strictly abide by the advisories.

The police team also closed all business establishments at 5 pm in the afternoon while cautioning that no one should come out without any emergency from 7 pm and violators will be fined or appropriate action will be initiated as per the law.

With 15 new COVID-19 positive cases recorded on Thursday, Covid-19 infection tally in Kangpokpi district surged to 36 while the fatality remained at 17 since the first wave of the pandemic.

Workers and officials of LECKON Infra Pvt. Ltd. stationed at Kangpokpi District Headquarters for construction of four lane highway were the worst infected in the district so far.