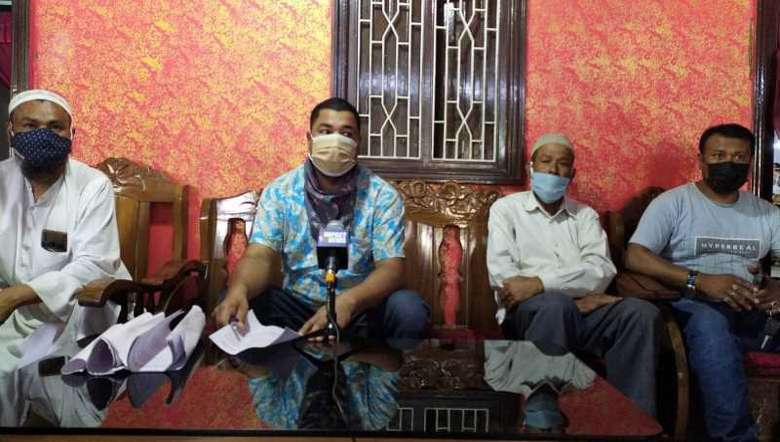 Personnel of 16 Assam Rifles have been accused of attacking three civilians at gunpoint at Urup Khunou Makha Leikai, Imphal East district, following which a Joint Action Committee has demanded a clarification concerning the incident.

In a press meet held at the residence of Rajauddin in Urup Khunu Makha Leikai on Tuesday, he said that the incident took place on Sunday at about 9.30 pm on Sunday when they went out to eat ‘Paan’ (betel nuts).

Narrating the incident, he said they were on their way when one Hyundai i10 Grand (grey in colour) came and stopped in front of them. Of the four persons inside the car, three came out with one bearing an automatic rifle said to be an AK rifle, he said.

The AR personnel pointed the gun towards them and asked which one of them was Rajauddin, he said. When Rajaudding identified himself, he was told to come along with them, he added.

He further said an argument ensued with the three unknown persons and a confrontation followed between the two sides. Some locals from nearby on hearing the scuffle came in and joined the confrontation. Among four unknown persons, three were detained by the locals and handed over to Irilbung police station.

He further said the three unknown persons were later identified as personnel from 16 Assam Rifles. Rajauddin told that he is a carpenter by profession and he had no enmity in the past with anyone.
Drawing chief minister N Biren’s attention, he appealed to take appropriate action against the AR personnel for threatening civilians on gun point.

Convenor of the ‘JAC against the life attempt at civilians of Urup, Keirao and Kiyamgei’ Ser Shah strongly condemned the Assam Rifles personnel for the incident. The JAC was formed in connection with the incident.

Ser condemned the Irilbung police station for not lodging FIR against the three AR personnel who were allegedly involved in the life attempt of Rajauddin, Aslam and the juvenile. The government and 16 Assam Rifles should clarify the incident immediately, he said.

Speaking to the Imphal Free Press over the phone, an official at Irilbung police station said that the three Assam Rifles personnel were rescued by a Police team of the station. After giving first aid, the personnel were set free.

When inquired, PRO of IGAR (South) told the Imphal Free Press over the phone that they were not aware of the incident and added that an enquiry will be taken up.