Transplantation efforts on to save Manipur’s indigenous flower ‘Kombirei’

Kombirei, a purple flower mainly found in Lamphel Pat and Yaralpat, is on the verge of extinction. 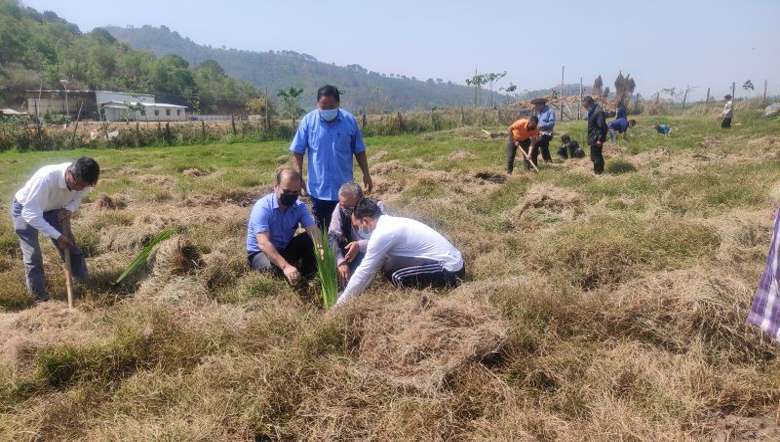 In an effort to save and protect purple Kombirei blossom from extinction, the endangered indigenous flower of Manipur which is closely associated with the history and culture of the state was transplanted in a scientific manner at its habitat Yaralpat on Monday.

Owing to the changing environment and ecosystem of their natural habitat, many fauna and flora are extinct and some are facing extinction. Kombirei, a purple flower mainly found in Lamphel Pat and Yaralpat, too is on the verge of extinction.

This indigenous flower blooms only once in a year and is associated with the traditional religion of the place. It is used to offer to the ancient deities on the day of Cheiraoba or Meitei New Year festival. Because of its striking beauty, a song was also written about it. Due to its endangered status, the Meitei community has been celebrating Cheiraoba without the use of kombirei for the past many years.

Hoping to bring back this unique species in the ‘Land of Jewel’ (Manipur), the Directorate of the Environment of Climate Change and the Manipur Initiative for Conservation of Nature (MICON) with technical support from the Council of Scientific and Industrial Research, North East Institute of Science and Technology (CSIR-NEIST) took the step of transplanting this endangering flower. The transplantation was started with a religious ceremony with the belief that the objective of the initiative would be fulfilled.

Addressing the media during the programme, principal scientist, CSIR-NEIST, H Birkumar Singh said, Kombirei flower is almost on the verge of extinction. This shows that the ecosystem of Kombirei flower is completely destroyed and hence the initiative to rejuvenate this rare species is much-needed.

The transplantation of the flower taken up on Monday is one such experimentation to revive the plant as the present ecosystem of Yaral Pat has changed since past many years. However, technical intervention will be given so that this traditional flower could bloom once again in its natural habitat area, he added.

Singh further said that though this flower is a unique species of the state, people are unaware about it. There are various types of the family Kombirei grown in Manipur. But the real Kombirei flower, which is associated with the culture, religion and legend of Manipur, usually thrive in marshy land or peat areas. As such, this species is said to be found only in its natural habitat Lamphelpat and Yaral Pat and this variety is different from the one grown in garden or at home in pots.

Kombirei in Manipur was earlier mistakenly cited as Iris bakari wall but the species is no misnomer. After thorough research, it was learnt that Kombirei found in Manipur is Iris laevigata fisch by CSIR-NEIST and it has been authenticated through Royal Botanical Garden, London, he added.

Chairperson of MICON, Koijam Setherjit said that with the change of climate and its environment, many species found in the state have become extinct and Kombirei is one among them.

The MICON, which is a charitable trust, is concerned about bringing back the traditional glory of Kombirei in the state. As such, the initiative of transplantation is being taken up. The trust feels that the concern for the unique flowering species is closely related to conservation of environment which will ultimately help in combating climate change.

Deputy Director, Environment and Climate Change, T Brajakumar said that the species Mauve-blue flower (Kombirei in local language, scientific name is Blue Iris Laevigata Fisch) has a historic habitat at Yaralpat. Keeping these facts, rejuvenation of Yaralpat wetland has been continuing since the last seven to eight years.

A few migratory and resident birds are reported every year since the last three-four years. Now, rejuvenation and conservation work of Yaral Pat Wetland is progressing under the objectives of the National Plan for Conservation of Aquatic Ecosystem, he added.