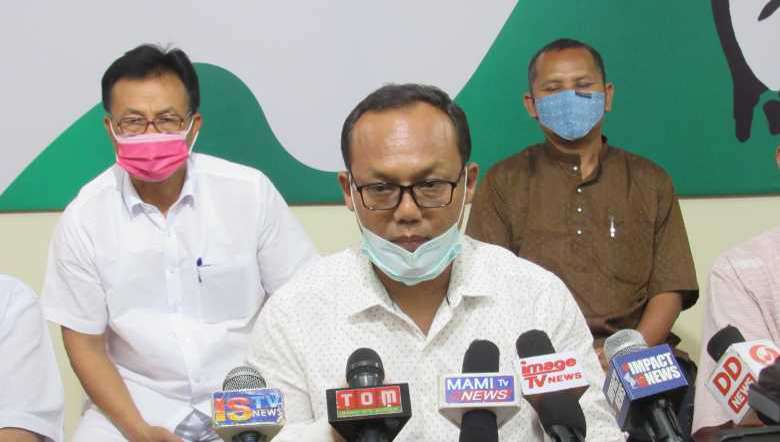 Alleging that the funds meant for Panchayati Raj Institutions (PRIs) and MGNREGS job card holders have been misappropriated, the Manipur Pradesh Congress Committee (MPCC) on Monday demanded the state government to immediately produce a white paper regarding the alleged misappropriation of funds.

The state received a total amount of Rs 485,50,75,000 from the Ministry concerned on March 18 to pay the wages for MGNREGS job card holders and for clearing two years’ liabilities for the PRIs, said Congress MLA, K Meghachandra in a press conference held at the MPCC office located at BT Road, Imphal on Monday. Also, Rs 83 crore was released earlier before the amount was released on March 18, he said.

Meghachandra said the pradhans and zila parishads seek appropriate response from the state government for not providing the funds though they have been released from the Central Ministry.

He further said that during the lockdown, the job card holders worked to earn wages; however, the Finance department and other departments concerned failed to clear the liabilities. Concerning the issue, the state government has already witnessed the recent 48 hours total shutdown imposed across the state by panchayat members, he added.

He pointed out that in the sanction letter from the ministry concerned, it is clearly mentioned that the funds should be released within three days from the date of sanctioning. The funds should be released together with 75 per cent as central share and remaining 25 per cent as state share, he said. If the state government fails to deliver the funds within the stipulated time, then it should be furnished with an interest of 12 per cent for the pending days, said Meghchandra.

If the department concerned fails to submit the utilisation certificate at the ministry concerned for the funds sanctioned to PRIs, then it would not be possible for the ministry to sanction the second instalment, he added.

He further alleged that the state Rural department has failed to release the funds to the PRIs as the department does not possess the funds. If there are no funds, then the state government should provide a white paper to the people, detailing where the huge amount of funds have been utilised. The state government should set up an enquiry committee to probe into the misappropriation of funds, he added.

He said the state Finance department, Rural Development department and the accountant general have failed to discharge their duties. The state government should show a detailed report on the utilisation of funds sanctioned for PRIs in order to bring transparency to the people, he added.

MLA further said that for the funds provided under the 15th finance commission, the government has not been transparent to the PRIs. Although the panchayat members received a small amount as a monthly honorarium, funds of 17 months are still pending, and the government should issue the pending honorarium amounts at the earliest, the Congress MLA added.