Seven truckloads of timber from Tamei forest seized in Kangpokpi

Large-scale illegal timber business has been going on in Manipur. 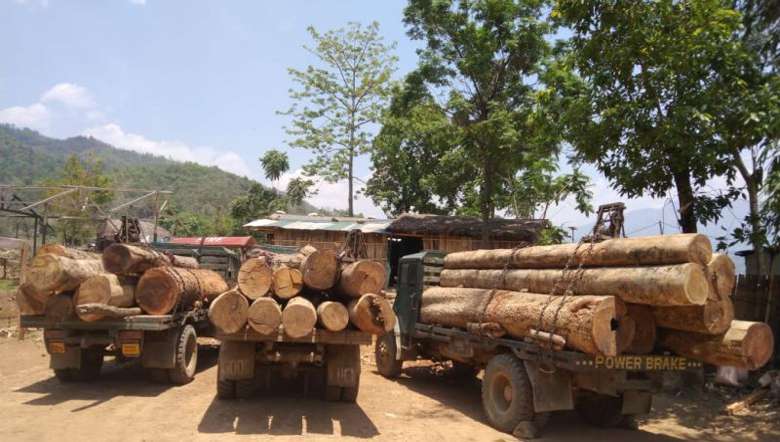 In a major crackdown on illegal timber logging and transportation, seven trucks carrying timber from Tamei Sub-Division of Tamenglong district to Imphal in Manipur were intercepted in two separate incidents by the security forces stationed in the area.

Acting on a tipoff, personnel of 44 Assam Rifles under the 22 Sect AR/ IGAR (E) seized the seven truckloads of timber at different locations in Kangpokpi district.

Truckloads of class A timber were being transported from Kadi and Kuilong forest area of Tamei Sub-Division for sale in Imphal market, stated the AR in a statement issued by its Adjutant.

The drivers of the trucks are usually accompanied by individuals involved in such nefarious activities, it said.

All drivers and the occupants of the seven trucks were apprehended while the timber-laden trucks were deposited in the custody of Kangpokpi District Forest Officer, Chilpilhing for further legal action, he informed. 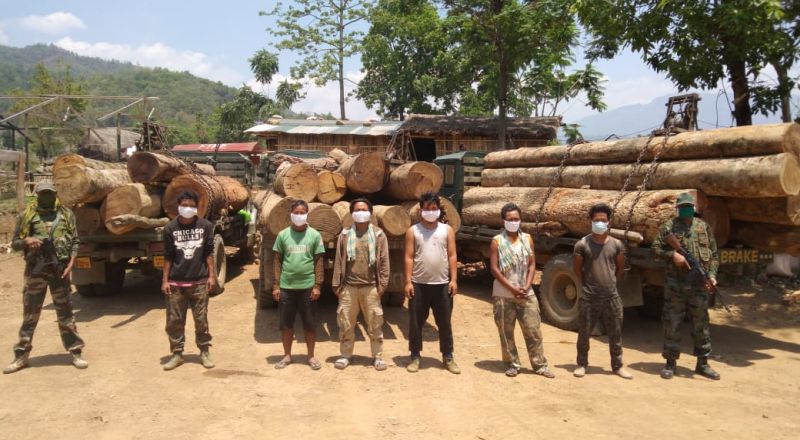 The security personnel said that the illegal timber trade from hill districts to valley has started showing its ecological effects. The barren hills devoid of any vegetation is contributing to global warming.

"As the world celebrated the Earth Day the perpetrators of illegal timber trade were busy looting the Green Gold from the Hills,” he said.

For the past 15 days, personnel of the 44 Assam Rifles have been spreading awareness against excessive cutting of timber in catchment areas.

Timber logging has affected the water level in Irang River flowing through the area, he added.

“Heavy timber logging has affected the daily livelihood of people living near the downstream Irang River. Knowing or unknowingly they continue to harm the society and humanity at large. Still these perpetrators continue to harm the ecological balance in the region,” according to the statement.

The 44 Assam Rifles Battalion launched a crackdown on illegal timber trade in the region on Thursday. The suspicious movement of trucks at odd hours was kept under discreet surveillance by personnel of Gelnel outpost, the AR said in the statement. It said the locals too are helping the security forces by providing intelligence about these perpetrators.

“The team intercepted four heavy vehicles loaded with illegal timber at Bunglabung in Kangpokpi district on Thursday,” the AR said in the statement.

Similar action resulted in seizing another three trucks on Sunday, it said.

Apart from seizing illegal timber being transported from Tuilang area, the troops continue to spread awareness about saving trees for future generations, it added.

The illegal act for short-term monetary gains from this illegal timber trade is fuelled by support from various illegal organizations operating in the area, the AR said.

Large-scale illegal timber business has been going on in Manipur. The Assam Rifles in synergy with the state forces and the forest department are taking concrete actions to curb these illegal activities," it added.

Only a month ago, on March 20, 2021, the Imphal Free Press published a video on how illegal timber logging was carried out unchecked in broad daylight. WATCH THE VIDEO. Following it, four days later, Forest and Environment and Climate Change Minister Awangbou Newmai said the Manipur Forest department was gearing up to set up a "Drone Squad" unit to monitor illegal activities, including timber trade, being carried out in the reserved forest area of Manipur.

The minister made the announcement of a Drone Squad while delivering his speech as chief guest at a distribution programme of forestry equipment and modern gadgets to the Forest Divisions offices and selected handicraft units in the state on March 25, 2021.

Smuggled timber worth over Rs 10 crore seized in Ukhrul