United Builder's School Principal Maj (Retd) G Kamei said that out of 73 students appeared, 23 students passed in first division, 29 students in second division, 20 students were adjusted to appear in compartmental examination and one student was placed for external examination. 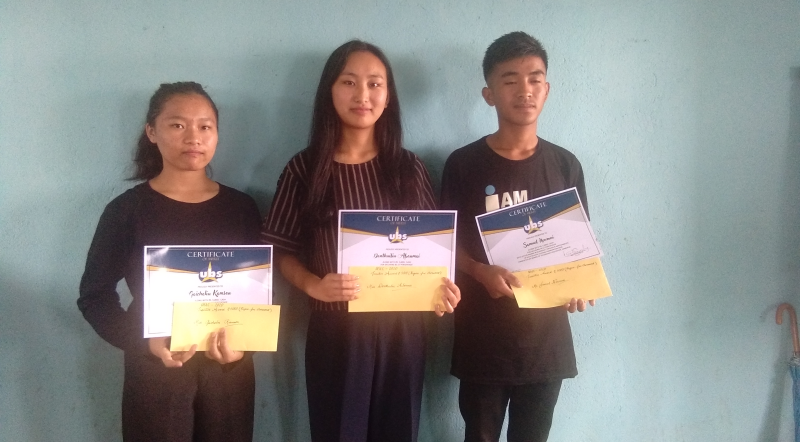 The three toppers of the school (PHOTO: IFP)

The United Builder's School (UBS) Tamenglong on Saturday felicitated their students who excelled in the High School Leaving Certificate (HSLC) examination conducted by the Board of Education Manipur (BOSEM).

The felicitation programme was held at the Shekinuh Inn Tamenglong district headquarters. Town Baptist Church Tamenglong pastor reverend Namsadai Kamei handed over the certificates and cash to the toppers. He read out the holy Bible, shared the gospel and prayed for the students.

He also expressed his sincere gratitude to the students and parents for bringing laurels to the school. He informed that UBS Tamenglong has 1,456 students passing out since 1993 till date. Among 1993 alumni, many got high profile government jobs, doctors, nurses and even some became pastors serving God and men.

In the meantime, Tamenglong Higher secondary school drew blank in the HSLC examination this year, however Model village government high had 64 students appeared- only two students passed in first and third position.