Nothing official about it

IFP Editorial: And if the Manipur government wants to declare the sacred site at Koubru ridge as a protected site, it has to have a no-objection certificate from the Forest authority and none other. 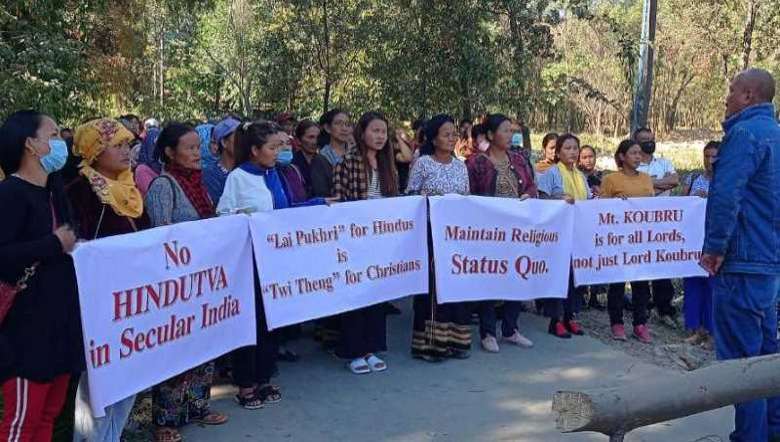 Nobody knows why the Committee on Protection and Preservation of Mount Koubru (COPPK) had backtracked from its original threat of closing all entry points to Mount Koubru and what transpired in the intervening period. When the committee made its announcement on April 11 of immediate closure of the entry points, it did not make any exception. But on April 14, it came out with a clarification that it did not mention restriction on pilgrims on religious purposes. One would have thought, better sense seems to have prevailed among the protestors. The basic question is, who are they to restrict or allow people in and out of Mt Koubru. How could one claim to own a mountain? It is simply ridiculous.

The protagonist in this drama, one Tongmang Haokip, Chief of Saitu and advisor of COPPK, has quoted a document supposedly issued by Manipur State Durbar in 1947 in a FB post to buttress his claim over the mountain. What he conveniently forgot to mention was that a 33 square mile area, including the Koubru range had been notified as Kanglatongbi-Kangpokpi Forest Reserve back in 1968 after considering all claims and objections from the surrounding villages, as per the Indian Forest Act, 1927.

The original proposal for the Kanglatongbi-Kangpokpi Forest Reserve was for an area of 40 square miles as per the notification issued on May 5, 1961, following which objections were called from the surrounding villages as required under the provisions of the Act. After considering all the claims and objections, the Kanglatongbi-Kangpokpi Forest Reserve was duly notified on July 3, 1968 albeit with a reduced area of 33 square miles. The boundary as specified in the notification is as follows: Imphal-Tamenglong Road in the north, Thumkhong Lok in the south, the ridge of the Koubru range in the west and the stream which meanders from Thumkhong Lok till the Isinghaobi Lok in the east. Forest officials attest to the fact that the sacred site of Mt Koubru which is a pilgrimage point of the Meiteis lies within the Forest Reserve. Encroachment or habitation, agriculture activities or felling of woods is prohibited in the reserve forest area. Yet, blatant violations of forest rules and regulations have been going on unhindered. Recently, the Chief Minister N Biren Singh had come down heavily on the Forest department officials for the widespread deforestation in the sacred Koubru range while speaking at a function. He instructed forest officials to go and see for themselves the state of degradation and take up appropriate measures for rejuvenating forest cover in Koubru and other hill ranges for the sake of future generations and also appealed to the people inhabiting the general area to cooperate with forest officials. For the present, the Forest department has the authority to block anyone from carrying out any activity prejudicial to the upkeep and conservation of the forest reserve and none other. And if the Manipur government wants to declare the sacred site at Koubru ridge as a protected site under the Manipur Ancient and Historical Monuments and Archaeological Sites and Remains Act, 1976 in public interest, it has to have a no-objection certificate from the Forest authority and none other.

So far, Sports Minister Letpao Haokip and Forests Minister Awangbou Newmai have not said anything about talks on the Koubru issue with the representatives of Committee on Protection and Preservation of Mount Koubru (COPPK). According to the committee, they had met the two ministers at the Lamphelpat residential quarters of Minister Letpao Haokip. Now the question is, whether the meeting was official or a meet in their individual capacity as ranking hill leaders. Well, as to the purported agreement there is nothing official about it. As far as we understand, government ministers can only act as facilitators or negotiators in any talks but they cannot be a signatory to any agreement signed between the government and the other party. Yes, they can be witnesses to the signing. So, there is nothing official about the purported agreement signed by COPPK with the ministers. As to whether the said ministers were deputed by the chief minister to negotiate terms on his behalf, it is best known to the chief minister and his ministers.