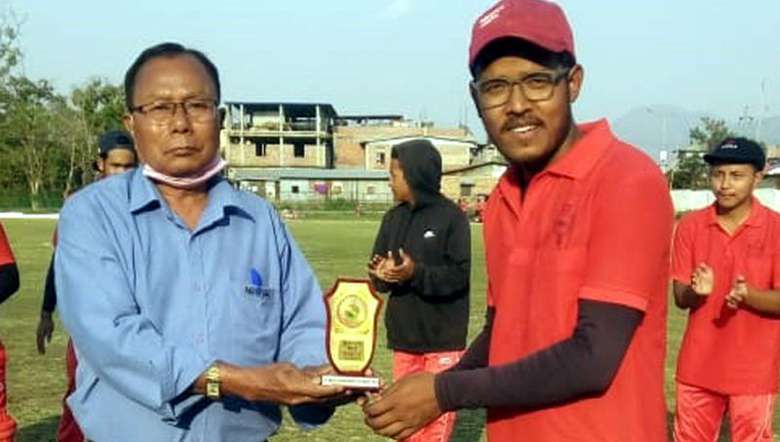 Winning the toss, THAU Thangmeiband rode on opener Rohen who made 42 runs along with Santoshkumar who cracked 22 runs to build up their innings to 167 runs for 4 wickets from 20 overs. Ranjan contributed 35 runs while Rabikanta got 26 runs. PTCC bowler Dominic claimed 1 wicket.

Chasing the target, PTCC top and middle order batsman put their effort with Sohail topscoring 47 runs while Kaikuyamba made 34 runs but sadly had to bow out with 162 runs for 7 wickets from 20 overs. Opener Champion got 25 runs and Hemachandra fetched 28 runs.

THAU bowler Amarjeet claimed 3 wickets while Rohen fetched 2 wickets and later declared the Man of the Match for his 42 runs knock as well.

In another match, Model Singjamei pulled off 27 runs win over KSDO Kiyamgei. Model Singjamei made 130 runs for 9 wickets from 20 overs with skipper Karnajit hitting 44 runs while Somorjit remained unbeaten with 39 runs.

KSDO bowler Karim bagged 4 wickets while Shamir picked up 2 wickets. In reply, KSDO batsmen were bundled out for 103 runs for 10 wickets from 18.4 overs. Nawaz Sharif topscored with 34 runs. Model bowler Jenius was adjudged the Man of the Match for his 3 wickets.

PCC in their reply could muster up 78 runs for 9 wickets from 20 over with Vikash hitting 22 runs and Tyson got 18 runs among the top run contributors. PTRC bowler Kenjit, Kh Santosh, Kiran claimed 3 wickets each. Bidash was declared the Man of the Match for his 56 runs knock.

Al-Ameen failed to reach the target as they bowed out with 101 runs for 9 wickets from 20 overs. Akram Khan managed to hit 15 runs. Champ bowler Sultan bagged 4 wickets and was later adjudged the Man of the Match.