Villagers hope for government initiatives as they struggle for livelihood

The plantation of potato, poppy and cabbage cultivation has been restricted in the surrounding area of 3 km of the hill slopes from Jaimeng lake. 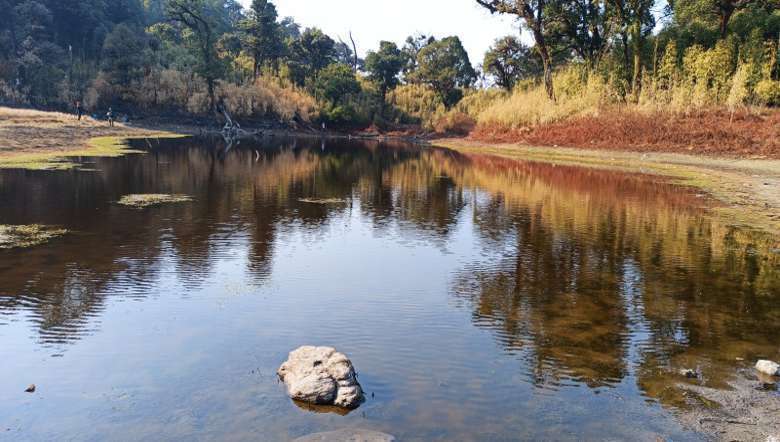 Villagers of these three villages are waiting eagerly for the state government to initiate steps for the protection of Jaimeng wetland area which, they hope, will at least give them some means of livelihood, former chairman of Chawangkining village, Wisubou Charenamei said speaking to the Imphal Free Press on phone.

Wisubou said the villagers are pinning their hope on wetland protection and forest conservation initiatives because they now realised the adverse impact of deforestation.

Deforestation activities reached an alarming level as the villagers started potato and poppy cultivation on the mountain range of Jaimeng wetland. However, poppy cultivation has been stopped since 2015 following the ban on it, Wisubou said.

Chawangkining village is located about 22 km from Kangpokpi Bazaar (NH2) and 44.5 km from the capital city Imphal. The three villages together have about 250 households with about 1000 population, the former village chairman said.

The main problem in the villages is lack of means of livelihood for the people, Wisubou said. He said that apart from farming, some menfolk take up carpentry works seasonally, while most women take to weaving traditional clothes. Most of the men shift to Imphal to make a living and earn some money to support themselves and their families or dependents.

The struggle to earn money to run a house, especially for providing education to the children is difficult, Wisubou said, adding that potato cultivation is not enough for running a family throughout the year. Some engage in paddy cultivation but due to fear of deforestation, jhum cultivation is almost stopped, he said.

The dry season brings along miserable times for the villagers. As most water sources are dried up during this season, the villagers face the problem of water scarcity, both for drinking and domestic purposes, every year.

The Malangjei (river), part of Imphal River, becomes dry during the dry season. Which is why, villagers are hoping for preservation of Jaimeng wetland to sustain water availability as well as livelihood.

About 20-30 years ago, the mountain ranges surrounding Jaimeng Lake were once covered with thick vegetation of indigenous plants and trees such as Uningthou, U-Thambal, Leihao and varieties of bamboos, said Wisubou.

Different varieties of floral species like Kalakbang (Michelia champacca), Maga (Phoebe hainensenia), Zaimeng rapen (Magnolia), Karangbang (Quercus) etc. are found growing in the surrounding environment. The forests have good undergrowth of shrubs and climbers, including the bamboo species Chaki (Arundinaria munro) which add to the structural diversity. The forests experience low to moderate biotic pressure in the form of fodder and firewood collection by the villagers and as a grazing ground for their cattle, according to a report on Himalayan Newt and Climate Change:  A Case Study on Zaimeng Lake, Manipur.

The report stated that deforestation is causing forest fragmentation and loss of habitat which may lead to the decline of floral and faunal diversity in the vicinity of the lake. The disturbances of environmental factors cause imbalances in the natural climate, leading to global warming by increasing the carbon dioxide level and decreasing the oxygen percentage in the atmosphere. At the landscape level, environmental impacts generally occur in the form of alteration of land features and fragmentation of biological habitats, leading to isolation of floral and faunal populations. Fragmentation of habitat into smaller patches may limit animal mobility, leading to loss of available habitats in the surrounding environment.

Pushing for forest and water conservation, villagers draw the attention of the state government to develop Jaimeng wetland as a popular tourist destination, and to construct a motorable road till Chawangkining and Bebopuson.

The Imphal Free Press had earlier reported on Jaimeng wetland, that endangered Himalayan Newt found at Jaimeng wetland was categorised under the endangered species by the Wildlife Protection Act, 1972. It is situated at Chawangkining village, Maraobou range which is surrounded by Atongba, Thonglang Akutpa and Chawangkining.

The estimated altitude of Jaimeng wetland is 2215 metres above sea level. If not the highest, this could be one of the highest lakes in Manipur. The lake is located at a distance of 4 km from Thonglang village on the eastern side of the village, which is about 22 km from Kangpokpi (NH 2 formerly NH 39).

Ten years ago, a joint council of three villages namely Bena Lun Phom (BLP), had positively responded to the call for nature conservation by adopting a firm resolution to protect the surrounding forests of Jaimeng Lake and wetlands.

Wisubou, representing the joint council, appealed to the concerned authority, particularly the Forest Department and it is the environmental wing, to take up appropriate steps to bring the Jaimeng Lake under the ambit of the National Wetland Conservation Programme, and construct the road to reach wetland easily at least until Bebapusom (waiting shed located between down village to wetland area).

The plantation of potato, poppy and cabbage cultivation has been restricted in the surrounding area of 3 km of the hill slopes from the lake for rejuvenating the forest by BLP. It appealed to the state government to provide an alternative arrangement for the villagers to sustain livelihood for the villagers.

Currently, the Directorate of Environment and Climate Change, government of Manipur has undertaken some initiatives to preserve the habitats of Jaimeng wetland. However, it is important for various stakeholders along with the local community to come together for an effective forest and wetland management plan. Active management and monitoring of Jaimeng wetland over a period of time is essential. In addition, the wetland is an important feeding, breeding, and drinking area for wildlife and provides a stopover place and refuge for wild bird species. As with any natural habitat, the wetland is an important part of supporting species diversity and has a complex and important food web.