The UKB team improved their performance as they struck at regular intervals to show their supremacy in maneuvering in short passes to outwit AIM on Friday. 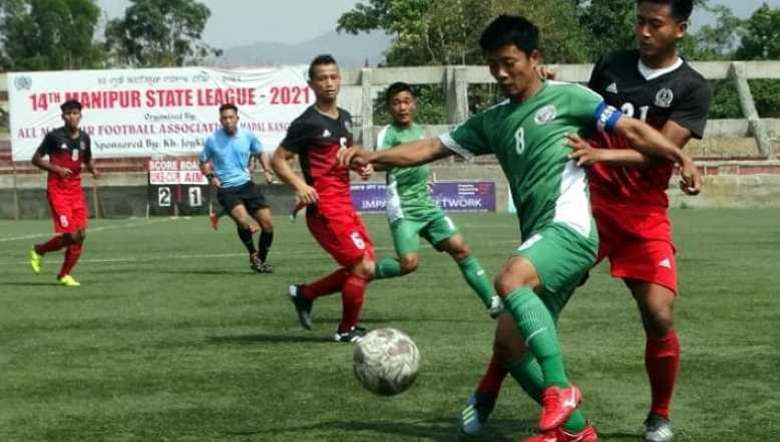 The UKB team improved their performance as they struck at regular intervals to show their supremacy in maneuvering in short passes to outwit AIM on Friday. Mangkholen Kipgen got the lead for the UKB team in 11 minute of play and later Paolenlal Khongsai consolidated from a penalty in the 24 minute to boost the scoreline.

AIM Khabam, pushed to the backfoot, got their needed breakthrough when E Joykishan found the angle right to slot home his team first goal in the 37 minute to trail by 1-2 goals in the first half.

The second half brought more joyous moments for the UKB team as Paolenlal Khongsai, repeating his feat, got cracking two more goals in 66 minute and 70 minute to bring up his hattrick goal and Nekmin John fetched one more goal during the added time. AIM too in a late minute rush, came up with their second goal from L Lamyanba in 90+3 minute, but too late prevented them from defeat.

In the second match, NISA Thangmeiband blanked Muvanlai Athletics by 3-0 goals. Sh Meiraba delivered the opening goal for NISA in 39 minute to enjoy the lead. Muvanlai Athletics never seemed at ease on Friday as their shots were off target on many occasions, frustrating them in humid turf ground.

Later on, L Sanatomba Singh in the 43 minute and Th Jonychand in the 83 minute scored in style to give NISA full points from the victory on Friday.

In tomorrow’s matches, TRAU FC will face SSU Singjamei in the first match while Sagolband United will meet GSC Churchandpur in second ground.