Al-Ameen batsman Nasir Shah took the Man of the Match for his 41 runs and 1 wicket. 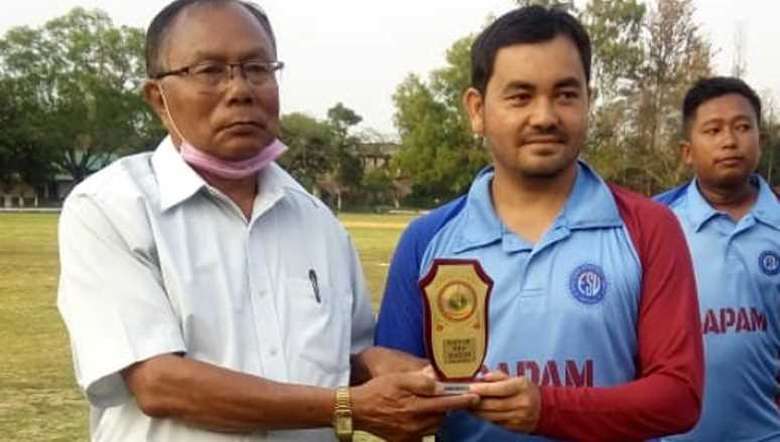 ESU batsman Mehul Singh, who bagged the Man of the Match for his 64 runs knock

In reply, PTCC put up their maximum effort from wasting the deliveries as Hemchandra scored 17 runs from as many balls while Andyroshan got 39 runs from 36 balls to steady the innings. Champion got 19 runs however the middle order batsman failed to handle the pressure and crashed out with 141 runs for 6 wickets from 20 overs.

At the Luwangpokpa Cricket Ground, PCC Mayaikoibi posted 36 runs win over KASC Khomidok. PCC batsman took the crease and it was skipper Santosh who spearheaded the innings with 70 runs from 55 balls to a respectable total of 129 runs for 8 wickets from 20 overs. Khomidok bowler Babu got 2 wickets while Farijuddin, Anjum, Aziz got 1 wicket each.

Chasing the target, KASC were bundled out for 93 runs for 8 wickets from 20 overs. Najir Khan with 26 runs and Javed Akhtar with 18 runs were the top run contributors. PCC bowler Chingkheihunba claimed 3 wickets while Jobanta fetched 2 wickets, Anjan and Santosh picked up 1 wicket each and the latter was declared the Man of the Match for his 70 runs and 1 wickets.

RCA in their reply could muster up 123 runs for 7 wickets from 20 overs. Aslam Khan got 43 runs while Alfash and Saba Khan hit 18 runs each. Al-Ameen batsman Nasir Shah took the Man of the Match for his 41 runs and 1 wicket.