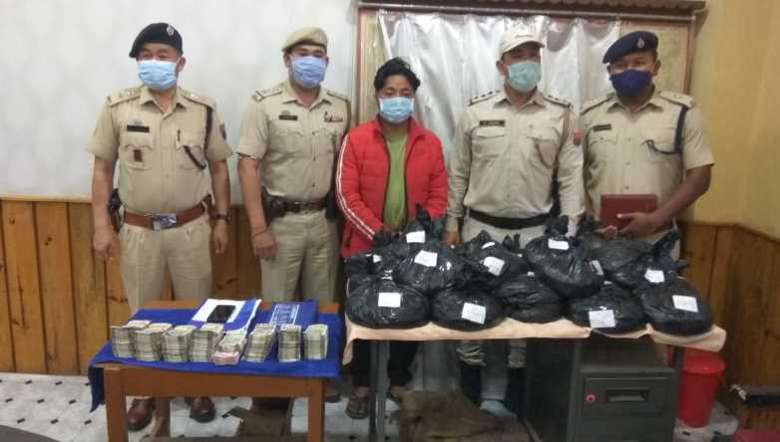 A team of Thoubal commando has seized drugs which were transported from Motbung towards Sangaiyumpham at Wangbal Khongnang Makhong, police sources said.

The sources said that at about 3:30 pm Thursday, Thoubal police had received information that Heroin No 4 powder was being transported in two vehicles coming from Motbung towards Sangaiyumpham.

The sources revealed that the Eeco van had one occupant and one driver who later identified themselves as one Thangkhulun Baite (28) son of Haokhothang  and Ngulkhohao Haokip, 29,son of  Letthang Haokip, both were resident of Moreh Ward No 1, Palunveng, Tengnoupal district. And the Alto car had also one occupant and one driver who identified themselves as Paominlen Haokip, 36, son of Otkhomang Haokip of Motbung and Tongthang Kipgen, 48, son of Letthang Kipgen of Motbung, both were residents of Motbung, Kangpokpi district.

On questioning the above persons, the sources said that the occupant of the Alto car, Paominlen Haokip, disclosed that 30 numbers of soap caps containing Heroin No 4 powders were kept concealed inside the modified chamber specially made to conceal the contraband drugs above the fuel tank of Eeco van and disclosed that he was the owner of the said contraband items.

On checking the Eeco van by the police in the presence of Sachidananda Soibam, Additional  SP(Opps) Thoubal and the four detained persons, 30 numbers of soap caps containing white powder suspected to be heroin number 4 powder were found concealed inside the fuel tank.

Further, the 30 soap caps of different colours (5 in green colour, 4 in blue colour and 21 in red colour) filled with suspected Heroin powder were weighed by using an electronic weighing device and its total weight was found to be 375.74 gm, including the weight of transparent plastic containers and seized by preparing formal seizure memos in the presence of witnesses, the sources added.

The detained two occupants and two drivers were arrested by preparing on the spot arrest memos. Later they along with the seized illegal drugs and vehicles were handed over to Thoubal PS for further legal action, the source informed.