Steps are being taken to help villagers in the hill district of Tamenglong in Manipur to adapt various sustainable alternatives of livelihoods with the focus on high profit income generating activities. 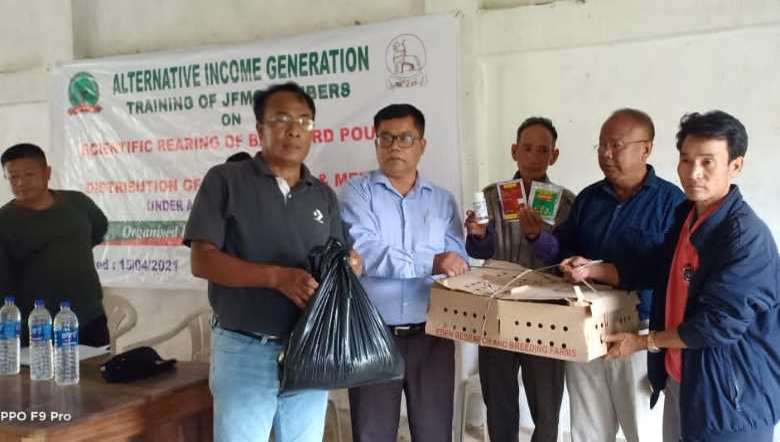 As a part of the forest and wildlife conservation efforts in view of the fast degradation of forest cover and considering the changing socio-economic scenario amid the pandemic, steps are being taken to help villagers in the hill district of Tamenglong in Manipur to adapt various sustainable alternatives of livelihoods and save the forest, with focus is on high profit income generating activities.

Also, considering jhum cultivation as one of the factors causing deforestation, efforts are being made by authority concerned to create awareness and provide training on scientific poultry rearing and bee keeping among others as livelihood alternatives to jhum cultivators of the region.

“Agroforestry project is being implemented in 10 joint forest management committees (JFMC) of Tamenglong forest division from 2020-2021.”

With the project emphasis on minimising the impact of Jhum cultivation, a workshop on scientific rearing of backyard poultry was held at Tamei sub-divisional headquarters on Thursday. The training programme aimed to provide alternative livelihoods or additional income generation to Jhum cultivators.

During the training programme organised by the forest development agency, Tamenglong, under district forest division in Tamei, 500 chicks, feeds and medicine were distributed to the members, and a similar number of items were also distributed to 50 beneficiaries of Tamei sub division of Tamenglong district.

“The futuristic aim is to help local villagers adapt with labour intensive yet high profit income generating activities,” the DFO said. He said that “improved varieties of poultry could fetch about double the price of local chicken; and they also provide larger size eggs for about one 150 days against the 75 days by the local varieties.”

The Divisional Forest Officer, Tamenglong also stressed on the negative consequences of Jhum cultivation, saying that it affects village forest areas to a large extent yet the yield is quite minimal compared to the labour investment.

“There are other activities that require very less labour such as poultry rearing, bee keeping and piggery but which still provide good returns,” he continued, adding that diverting Jhum cultivators to other activities would result in preserving valuable forest and wildlife for future generations.

It may be pointed out that Tamenglong, a rainforest region with rich biodiversity, has been facing the problem of massive deforestation in recent years owing to several factors, including expansion of urbanisation and development work apart from jhum cultivation. As a result, the region is now reeling under acute water scarcity and facing water crisis in the near future. Unless, urgent collective efforts are made by all concerned stakeholders to rejuvenate the region with afforestation activities and other livelihood alternatives, the worsening situation would result in crisis situation for the people.