Eminent film personalities Laimayum Surjakanta, O Gautam and S Mangoljao were the panelists of the dialogue which was moderated by RK Jnaranjan. 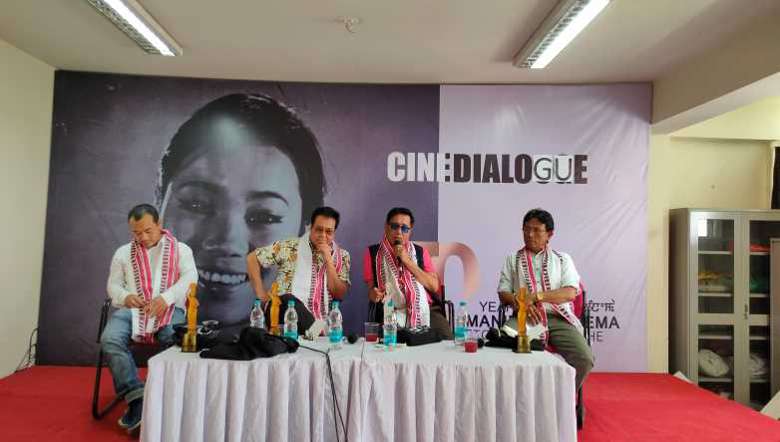 The same was deliberated during the Cine Dialogue on Future of Manipuri Cinema held on the fifth day of the ongoing inaugural programme of yearlong golden jubilee celebration of Manipuri cinema.

Eminent film personalities Laimayum Surjakanta, O Gautam and S Mangoljao were the panelists of the dialogue which was moderated by RK Jnaranjan.

Laimayum Surjakanta, who has been involved with Manipuri films since its formative period, said that Manipuri cinema is in a critical stage presently.

“Manipuri feature film with less than 5 lakh viewers, has seen a drastic decline in viewership since 2014,” he said. He said that the decline in viewership cannot be blamed only on the deplorable condition of the cinema halls as even those screened in the standardised theatre of the Manipur State Film Development Society (MSFDS) is witnessing lesser number of viewers.

Surjakanta pointed out lack of research work on part of the film makers in the present trend of Manipuri cinema. Producers and directors should discuss thoroughly before shooting, he stressed.

While mentioning that the touch of Imagi Ningthem still lingers in world cinema, he said that finding no financers for award worthy films is also a major challenge.

It is easy to find a producer for commercial cinema but those will not sustain and it does not secure the future of Manipuri cinema, he added.

Award winning director O Gautam highlighted that producers need to be knowledgeable about cinema and that in other states, film production is even studied. He said that lack of exhibition sector, shooting studio, post-production studio are some of the major problems crippling the Manipuri cinema.

“If we find a good script and after analysing the characters, also find the artistes, then almost half of the work is done,” he added.

The filmmaker also mounted pressure on the government to materialise the Film City and to make the Cine Policy more detailed to give a thrust to Manipuri cinema.

He further said that not only the films shot in Meeteilon/Meiteilon but films of other communities shot in their languages should be encouraged.

Chairman of Film Forum Manipur S Mangoljao said that the present trend as well as financial as well as technical constraints compelled many filmmakers to compromise on their part.

Nevertheless, some companies have approached the forum to buy Manipuri films and there is also possibility of collaboration work, he announced. He maintained that the film community in the state needs to be united and voice together the grievances to the government, without whose support, there can hardly be any major push for the growth of Manipuri cinema.

Moderator RK Jnaranjan summed up that the role of producer is pivotal and is just like that of a host.
He also opined that cinematic language is becoming absent and the films are executed mostly through dialogue.

There is seriousness during the celluloid era, which apparently wither with the coming of digital technology, he said and appealed for seriousness on part of the whole film team. He also urged to make the MSFTI fully operational so that enthusiasts can learn more about films.

Meanwhile, the MSFDS secretary Sunzu Bachaspatimayum said that the society is presently putting efforts to create a filmmaking ecosystem and setting up of sound mixing theatre, introduction of Manipur Film Promotion Fund to mentor and refine besides providing grants to stories are in the pipeline.