It is unfortunate that the magisterial inquiry team has not collected any statement from the victim’s family though the inquiry period is to end in two days, said Tikendra Athokpam, father of RIMS student Sanaton who was found hanging in his hostel room. 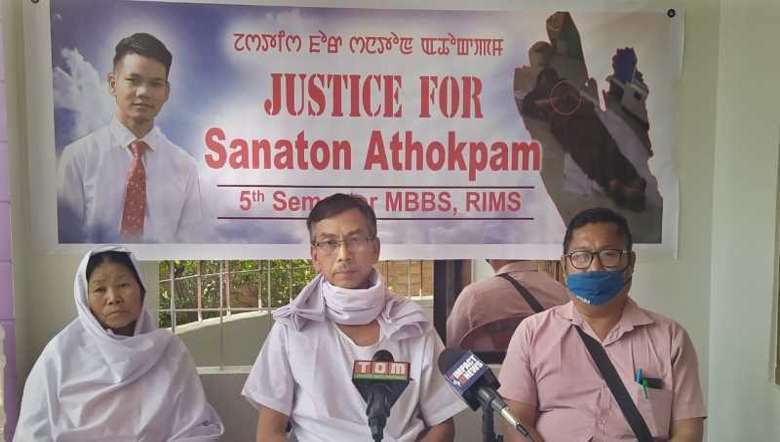 Father of late Sanaton, Tikendra Athokpam on Thursday sought support from the public in delivering justice to his deceased son and expressed that he has lost hope that the magisterial inquiry will bring out the facts behind the mysterious death.

It is unfortunate that the magisterial inquiry team has not collected any statement from the victim’s family though the inquiry period is to end in two days, said Tikendra while speaking to the media at his residence at Khurai Thangjam Leikai, Imphal East on Thursday.

Although certain clauses under section 176 permits the victim’s family members or relatives to take part in the magisterial inquiry, the authorities concerned have not provided a death certificate that would officially ascertain the day when the death actually took place, he said. Also, the family members were not allowed to enter and observe the crime scene, he added.

Not registering of any FIR till date when certain bruise mark were found on the face, body and foot of the victim clearly shows that there is biasness in the investigation which is one sided and the government is trying to make it look like a suicide, the father alleged.

“Pressure has been mounted upon the government on the maximum level from the side of the victim’s family, seeking justice for my late son; however, it has remained a silent spectator,” he mentioned and sought public support. He further urged the public to increase the momentum of the movement in demanding justice for Sanaton.

Meanwhile, womenfolk of Khurai under the aegis of Khurai Genial Club and ‘Justice for Sanaton Athokpam’ staged a sit-in protest at Lainingthou Awangba park, demanding to bring out the facts about the suspicious death of Sanaton and deliver justice.

Sanaton, an MBBS student pursuing his 5th semester at RIMS, Imphal was found hanging on March 15 at his hostel room in a suspicious manner.

In this regard, the Lamphal police had registered an unnatural death (UD) case under section 176 (inquiry by a magistrate into the cause of death in custody) of the Criminal Procedure Code and conducting a magisterial inquiry since March 17.