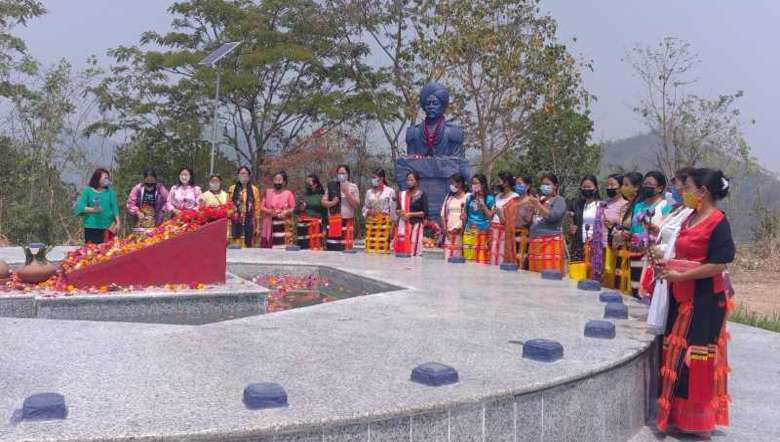 Family members, relatives, friends and well-wishers paid homage to the nine departed souls who were allegedly killed by security forces at the Kodompokpi incident on April 13, 1982 at their memorial site located at Cheiraoching, Thangmeiband, Imphal on Tuesday.

Large numbers of security personnel were seen deployed in and around the surrounding areas of the Cheiraoching as precautionary measures. Moreover, police personnel were seen conducting frisking and checking of vehicles in Thangmeiband area from Monday night.

Although the restriction of offering floral tributes was relaxed only for the family members and relatives of the deceased persons as ordered by the district magistrate, Imphal West considering the COVID guidelines, hundreds of well-wishers paid tribute to the departed souls.

The floral tributes were also given to freedom fighters of Manipur-Thangal General, Paona Brajabashi, Bir Tikendrajit and Hijam Irabot whose statues are located at the site.

Family member of a deceased Khundrakpam ongbi Medha Devi told the media that the day has been  annually organised on a grand scale ever since the then Guwahati High Court, Manipur gave the permission for paying floral tribute to the departed souls.

The day has been observed not only for the nine departed souls but for all the brave hearts and martyrs who laid down their lives fighting for the motherland, she added.