IFP EDITORIAL: Amid reports of vaccine shortages and the strike by JNIMS employees, Manipur Chief Minister N Biren took his shot of the Covid 19 vaccine at JNIMS hospital and appealed to the general public to get themselves vaccinated during the Tikka Utsav. We sincerely hope there are enough vaccines in stock at the various health facilities. 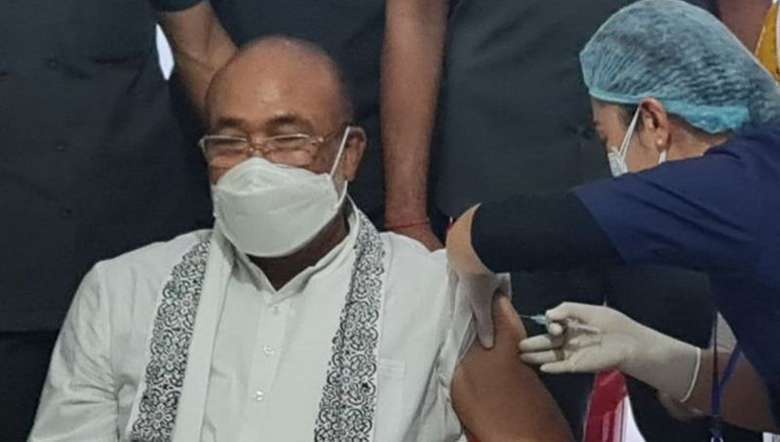 The Indian State has a unique way of dealing with the Covid 19 crisis right from the beginning with even calls for beating thalis and lighting candles on auspicious occasions. Now, just as the complaints of states on shortage of Covid vaccines come in, a Tikka Utsav or Vaccination festival was announced starting Sunday.

Sidestepping the daily surge of more than 1,50,00 positive cases, it chose to highlight the achievement of the “fastest country in the world” to administer more than 100 million doses of coronavirus vaccines, amid a deadly second wave of infections. It achieved the feat in 85 days, whereas the US took 89 days and China 102 days, the Health Ministry said. One would think, what is there to celebrate in the juggling of numbers and percentages or comparisons with other countries.

This week, half a dozen states reported a shortage of doses even as the national government insisted that it had 40 million doses in stock and that the “allegations” of vaccine scarcity were “utterly baseless”.

Meanwhile, a four-day-long ‘Tika Utsav (vaccine festival)’ for COVID-19 from April 11 to April 14 is being held across the country from Sunday, following Prime Minister Narendra Modi’s meeting with state chief ministers to help people eligible for vaccination to get immunised during the period.

The Prime Minister chose to give a meaning to the vaccination drive as April 11 and April 14 are the birth anniversaries of Jyotirao Phule and BR Ambedkar.

Amid the recent strike by employees of JNIMS, Imphal, state Chief Minister N Biren Singh took his shot of the Covid 19 vaccine at JNIMS hospital and appealed to the general public to get themselves vaccinated during the Tikka Utsav. We sincerely hope there are enough vaccines in stock at the various health facilities. There might be misgivings or reluctance among members of the general public as to the safety of the shot, which needs to be clarified. Now that the chief minister himself and other ministers have taken the shot, it would be a lot easier to convince the public.

Are we ready for the 'Second Coming'