Pointing out that wildfires have increased in the district causing large-scale destruction of forests, people in the region are warned that if the burning of trees continues, water supply sources will be adversely affected and there will be water crisis the district which is already reeling under acute shortage of water. 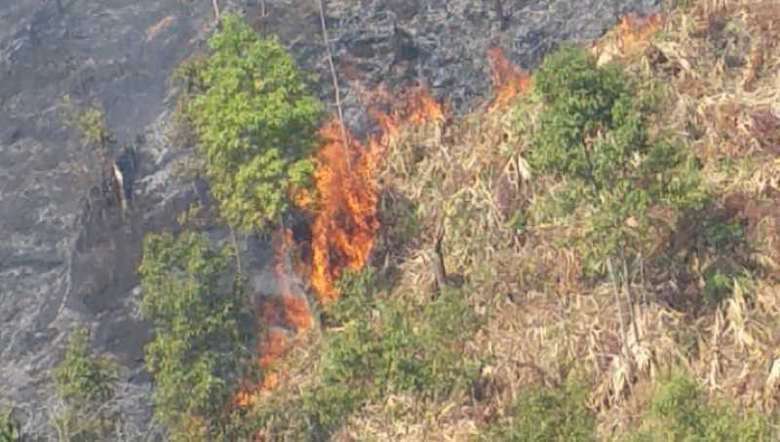 Amid the widespread concern and increasing incidents of wildfires in the forests of Manipur’s Tamenglong district which is known for its large forest cover and rich biodiversity, wildlife enthusiasts and stakeholders in the region came together in an effort to prevent further wildfires and save the ecosystem.

Although wildfires occurrence across Tamenglong district is seasonal and it happens in other states and countries as well, the district has been witnessing increasing cases in recent years. Taking serious note of it and the water shortage problem in the district, the Forest division Tamenglong in collaboration with Happy Villa village authority organised a one-day consultative workshop on ‘Prevention and Control of Forest Fire for stakeholders on Friday (April 9, 2021).

Happy Villa village is located at the foothills of Gadai Hills forest range which is the only source of water supply for the town areas. The Gadai Hills, also popularly called ‘Prayer Mountain’ was hit by wildfires on three occasions this year. However, fire department personnel, policemen along with volunteers of Happy villa village douses the fire after hours of struggling to put out the fire.

Pointing out that wildfires have increased in the district causing large-scale destruction of forests, the DFO warned that if the burning of trees continues, water supply sources will be adversely affected and there will be water crisis in the near future in the district which is already reeling under acute shortage of drinking water.

Reminding the masses that Gadai forest is the only source of water for Tamenglong town and almost all water sources have dried up, Dr Chambo Gonmei, district chief medical officer and wildlife warden, Tamenglong, said the District Hospital Duigailong, Tamenglong is facing problem in its proper functioning due to the acute shortage of drinking water.

“There is no water available even for purchasing in times of crisis situation… We have to wait for three to four days to buy water. Therefore, let us preserve the forest and wildlife including flora and fauna to ensure availability for drinking water,” Dr Chambo Gonmei appealed.

The wildlife warden further pointed out that the number of forest guards is inadequate in the district, and non-locals seldom stay at their station while also motivating the youth that they can be forest warriors to preserve, protect and  control wildfires at Gadai forest.

In regard to the appointment of forest guards, Dr Chambo Gonmei suggested that it will be appropriate and best for the department and particularly the district administration if the recruits hail from the district. He concluded his speech with a fervent appeal to all the people of Tamenglong, particularly those living near the foothills of Gadai Hills to protect and preserve the forest for water.

Tamenglong wildlife warden Nehemiah Panmei and Happy Villa village chairman Andrew Panmei also spoke on the occasion and both emphasised on the need to preserve and protect wildlife, flora and fauna, forest trees for the sake of water for the town.

Around 160 people, including youths, members of women wings and other villagers, attended the awareness programme on the current situation.

In an effort to encourage community participation, blankets were presented to all the elderly people of Happy villa while wildfire fighting equipment such as spades, shovels and water bottles were provided to the village in order to help combat further occurrence of wildfires in the region.

Joining the people's effort to create awareness on the need to protect the forest and the ecosystem of a region, the Imphal Free Press has highlighted reports on wildfires in its publications.