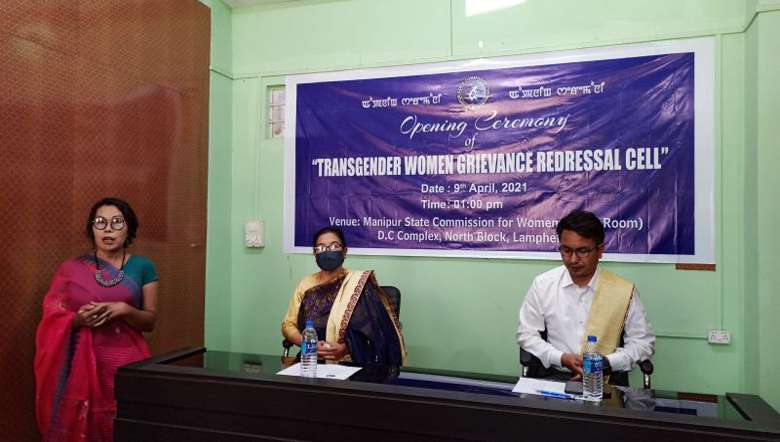 In what can be termed as a historic move, Manipur State Commission for Women (MSCW) has launched a ‘Transgender Women Grievance Redressal Cell’ at the premises of the Commission on Friday.

Claiming that the redressal cell is one of the first in the country, MSCW chairperson Meinam Binota said the opening of the cell will allow inclusion of transgender women in government bodies.

The launch brings a step closer to integrating the marginalised and vulnerable sections into the mainstream society, she said, adding transgender women should avail speedy redressal to their grievances and have access to governance platforms. Transgender women can lead a meaningful life only when they are legally and social included, she added.

The cell seeks to provide a space for the transgender women to tackle their problems, issues and the challenges they face, she mentioned.

Following the recent announcement by the Ministry of Social Justice and Empowerment about the protection of Right Act 2019 which can be exercised of the powers conferred by sub-section (1) and (2) of section 22 of TGP (Protection of Rights Act, 2019), the MSCW strongly felt the need to create their platform within the constitutional and legal framework work, she said.

Speaking on the occasion, Shanta Khurai said the launch of the grievance redressal cell came after a long struggle. She is one of the prominent voices demanding an inclusion of transgender women in the redressal cells meant for women. A proposal to open a grievance cell was drafted after taking part in a public hearing called by the chairperson of the MSCW, she said.

Expressing hope that opening of the cell will change the discriminations and oppression meted out against the transgender women, she said that transgender women should be employed at the cell as they would help in creating a better understanding of their issues.

Redressing their grievances requires following the rules and regulation given by the Act, said Social Welfare department director Ngangom Uttam.

During the speech, Binota urged Uttam to provide a shelter home for transgender women from among the women’s shelter homes run under Social Welfare department.

In response, Uttam replied that the women's shelter homes are run under the social welfare department following the directives of the Ministry and therefore, the department needs to take permission from the ministry. He said will make the proposal to the ministry if it is applicable.