L Sotinkumar alleged that the leaders of the state are highly involved in corrupt practices in their attempt to buy votes during elections. 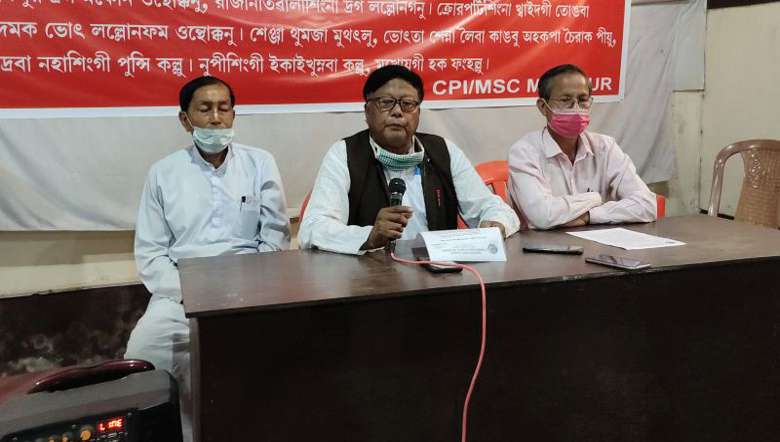 Declaring that the BJP-led government is undeserving of ruling the state, Communist Party of India, Manipur State Council (CPI-MSC) on Thursday announced that its mass campaign from April 8 will tell the public how the state is being ruined in various aspects after BJP came to power.

The present government claims to be a ‘people centric government’ but in reality, it does not care about anything related to the people’s welfare and this has caused several issues in society, CPI- MSC secretary L Sotinkumar said in a press conference held at its office, Irawat Bhawan Complex on Thursday.

The ration given under Food Security Act has been reduced while the number of days for Mahatma Gandhi National Rural Employment Guarantee Scheme (MGNREGS) slashed, he said, mentioning about some of the rights allegedly robbed by the present government.

Sotin alleged that the leaders of the state are highly involved in corrupt practices in their attempt to buy votes during elections. The state government will never bring welfare in society until and unless such corrupt practices are removed, he said. In order to save up the money to be spent during the election, most of the political leaders are involved into drug business and it has made the state a favorable place for drugs, he alleged.

He said that prices of almost all the commodities in the market are skyrocketing and the maximum numbers of the population living below the poverty line are struggling to make their ends meet. “How can we call this government as people centric when the maximum population is going through severe hardships?” he questioned.

To save the future of the state from the hands of the BJP government, the mass campaign is going to be organised in various parts of the state, he said, urging the people of the state to join the campaign.