The protesters demand justice for Sanaton who was found hanging in the hostel room at RIMS, Imphal. To prevent any untoward incident between the protesters and passers-by, police diverted traffic at Lamlong junction, Minuthong and other locations in Imphal. 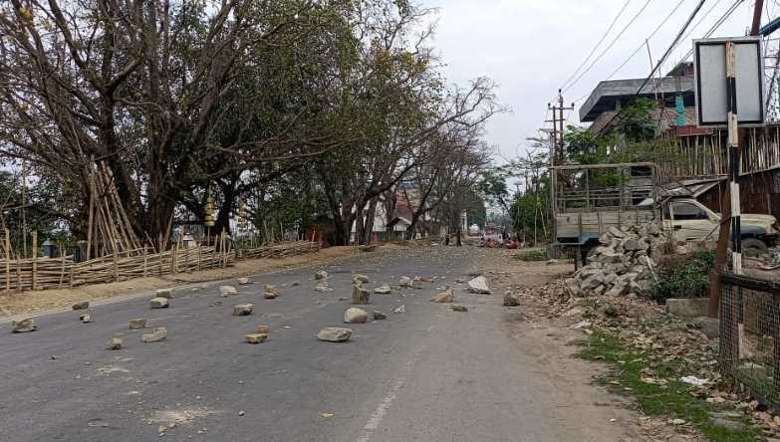 Irate locals of Khurai blocked Imphal-Ukhrul road and the road leading to JNIMS from Lamlong bazar on Thursday as a part of the agitation demanding justice for Sanaton Athokpam who was found hanging in the hostel room at RIMS, Imphal.

The agitation was taken up under the aegis of the JAC ‘Justice for Sanaton Athokpam’ following a resolution taken during a meeting convened by the JAC Wednesday.

In order to prevent any untoward incident between the protesters and passers-by, police diverted traffic at Lamlong junction, Minuthong and other locations in Imphal.

The JAC demanded to take up the investigation of the Sanaton death case by filing an FIR, suspension of the RIMS director and warden of Gents Hostel No 3 of RIMS.

Thousands of women folk of Khurai also took up a meira rally in and around the Khurai area late Wednesday, decrying the alleged murder of Sanaton.

According to a release issued by the convenor of the JAC M Loyalakpa, road blockade will continue until their demands are met.

Meanwhile, Lamlong Keithel Phambi Apunba Nupi Lup has called total shutdown of shops and establishments in and around Lamlong Keithel area till Friday 6pm in support of the agitation.

Sanaton Athokpam, a medical student of Regional Institute of Medical Science (RIMS) was found hanging inside his hostel room in a suspicious manner on March 15.