How Thadou tribe sows the seeds of peace, love and unity as they celebrate Hun Festival 2021

Hun festival is celebrated by the Thadou tribe in Manipur to mark the germination and sprouting of seeds sown in the fields that brings forth new lease of life and hope. 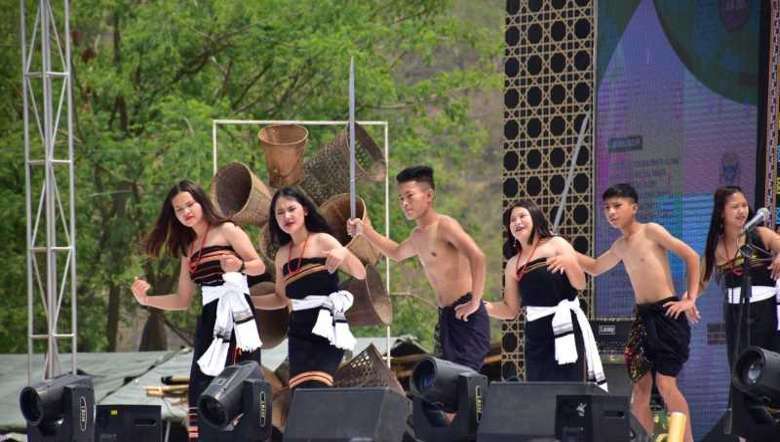 The air reverberated with the sound of celebration and the light of joy and hope lit up the streets in the hill district of Kangpokpi in Manipur, as the Thadou tribe on Wednesday celebrated one of its biggest festivals - ‘Hun-Thadou Cultural Festival 2021’ in a grand manner with great fervour.

Ushering in new life and hope with the old and the modern as spring season begins, young boys and girls belonging to the tribe performed folk dances and songs in traditional costumes. The crowning of Mister and Miss Thadou and message of peaceful coexistence also marked the celebration.

The Hun festival holds great relevance and significance for the Thadou tribe. It is celebrated to mark the germination and sprouting of seeds sown in the fields that brings forth new lease of life and hope.

Thadous, old and young, living in different parts of Manipur converged at the Brig Thomas Ground in Kangpokpi town to celebrate the Hun festival. The event was organised by Hun Thadou Cultural Festival Committee, 2021 under the aegis of Thadou Inpi General Head Quarter under the theme “My Culture, My Identity”.

During the celebration, several dignitaries present at the event highlighted the significance of the Hun-Thadou Cultural Festival 2021.

“Hun, which is an important cultural festival of the Thadou tribe, reflects the way of life of the tribe down the ages and remains an integral part of the cultural identity of the tribe,” Kangpokpi MLA Nemcha Kipgen explains while delivering the mammoth gathering.

The festival is a part of the cultural and traditional heritage passed down by the forefathers of Thadou tribe. It is fortunate that they have left an important and valuable cultural identity, she said.

The identities of the Thadou tribe are guided and guarded by certain cultural values which are shown in the form of their beliefs and practices, rituals and ceremonies, arts and literatures, traditions, customs and many more, Kipgen said.

“The cultural value of the festival will be the guiding force for the wellbeing of individuals and welfare and overall development of a nation,” Kipgen said, adding, “Let us make the festival a platform to sow the seeds of peace, love and unity among different communities… Let us also sow and reap our own success through hard work and dedication”.

Tribal Affairs and Hills Minister Vungzagin Valte delivering his chief guest speech, assured the gathering that he will apprise the chief minister with a proposal for organising a festival for every tribe of Manipur.

“Hun is an annual religious affair for a family wherein the Thadous acknowledge the existence of all powerful gods in whom they repose their complete faith,” said advisor of Thadou Inpi Thangtinlen Haokip while speaking on the Hun Festival at the event.

Hun is also celebrated as Children’s Day of Thadous and to acknowledge the hard work and contribution of the women folk of the community, Haokip said.

Governance in the chiefdom, including the welfare of the subjects and parenthood in the form of duties and responsibilities of the chief and Thadou fathers and the mothers are celebrated in ritualistic form during the seven-day celebration of Thadou Hun, Haokip said.

“Hun is regarded as the custom, the culture, the religious affairs, and the greatest occasion for almost everything in the social, religious, and political life of the Thadou tribe,” he added.

On behalf of all the Thadou tribe, Thadou Inpi submitted a memorandum to the chief minister through Vungzagin Valte urging to officially declare April 7 (every year) as a restricted holiday in the state calendar to mark Hun Festival.

Colouful forms of Thadou cultural dances, live music and the crowning of Mister and Miss Thadou was the biggest draw of the festival.