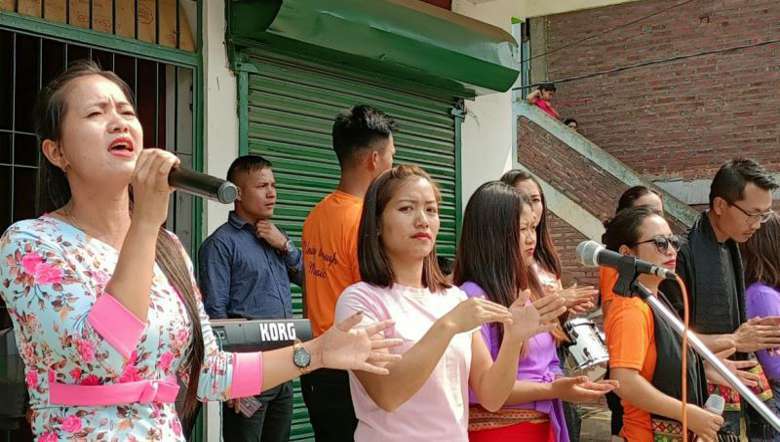 The Thadou Artistes Association (TAA) and the Jubilant Band Motbung extended its support for the people of Myanmar and sought for help through their talents in Kangpokpi district amid ATSUM emergency shutdown in the hill districts.

The artistes association in collaboration with the band organised a charity live concert at Motbung model village in Kangpokpi district on Tuesday morning at around 7 am till 11 am. They sang on the street and sought public contribution for people struggling for freedom in Myanmar. They were able to collect around Rs 80,000 through the charity concert.

Later, TAA and the band organised the similar charity live concert at Kangpokpi DHQs from 1 pm till late in the evening. The concert was conducted at two locations, one at downtown IT Road junction near Nute Kailhang and at uptown Kangpokpi bazaar.

Speaking on the sideline of the live concert, the Jubilant Band director, Rev Khupthang Sitlhou said that people in Myanmar including children and women are suffering tremendous hardships owing to the military coup since February 1. He continued that the people are struggling for their lives and freedom while fighting back to earn the country's democracy from the military while hundreds of people had already cost their precious lives in the fight against the military coup.