AMTU president RK Ajin said that AMTU was formed out of necessity to protect tribal identity, rights, land and to extend helping hands to tribal people. 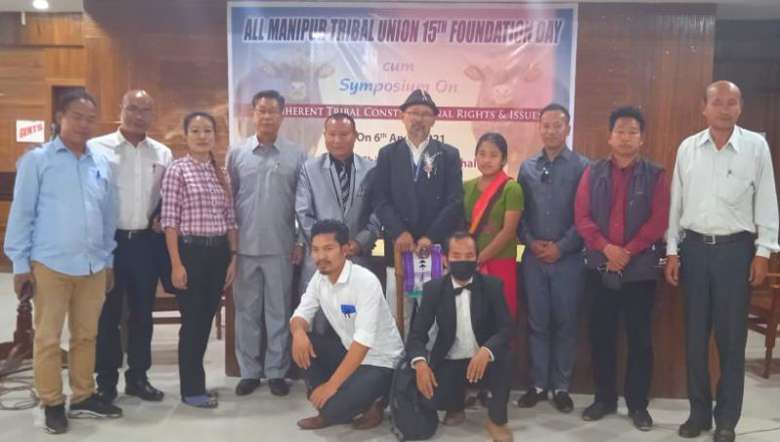 A release said that the foundation day began with the prayer of Rev Lalpi Vaiphei, which was followed by Flag Hoisting by chairman of Hill Area Committee (HAC), Leishiyo Keishing as chief guest, flanked by officials and members. The guests of honour of the function were retired IRS and chairman of Manipur State Commission for the Scheduled Tribes (MSCST), SP Peter Khrasi and chairman of Zomi Chiefs Association, Manipur, Pumzadou Thangsing.

Giving the welcome address, president of AMTU RK Ajin said, “AMTU was formed out of necessity to protect our tribal identity, tribal rights, land and to extend helping hands to our tribal people. We must fight for our tribal rights. To be united and standing together is the only way to fight our rights.”

During the programme, a one-minute silence was also observed to pay homage to the departed souls of the founding fathers of AMTU.

Leishiyo Keishing spoke on how HAC came into being. “Time has come to make new land laws. There is always conflict in the acts, because there is no land law pertaining to the tribals,” he said.

SP Peter Khrasi said that HAC is supposed to take care of the tribal interest, but in reality it cannot. The state government has created a tribal affairs department so as to control the HAC.  “We have to fight our rights which are bestowed by the Constitution of India,” he said.

The symposium on the topic ‘The Inherent Tribal Constitutional Rights and Issues’ was moderated by Chuimei Zimik and Bruce K Thangkhal as recording secretary. The main theme was ‘Forest Conservation Covering Hill Villages and Government’s Suspension on New Hill Villages Recognition’.

Former ADC of Churachandpur, H Mangchinkhup and social activist Zamlal Lhungdim have also shared their insights during the symposium.

“We need to stand up together and fight against the state government. We have nine MLAs from hills and these MLAs have to elect the chairman of HAC. The chief minister has nothing to do with the HAC chairman. There is something wrong in our administration,” Mangchinkhup said.

The event came to an end with a prayer by pastor of MBC Centre Church, Rev Zuankamang Daimai.