This is SSU's first win in the league as they managed a 1-1 goals draw against Neroca FC in their previous match. 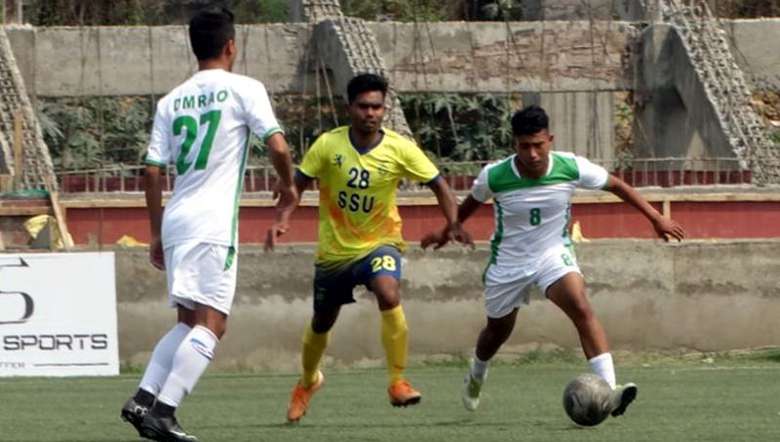 This is SSU's first win in the league as they managed a 1-1 goals draw against Neroca FC in their previous match.

Resolved to make an impact and garner maximum points in the league, SSU Singjamei raised the bar of the match with H Shital picking up the opening goal in the 23 minute of play. DM Rao did have their chances but did not go for the kill.

As the goal built up the confidence of the team, SSU Singjamei paced up and brought up the second goal with Th Suraj Singh ruffling the net in the 29 minute to take a tight grip in the match. Making full use of its energetic approach, H Shital brought more cheers to his team bench when he netted home the third goal in the 44 minute to dominate the first half by 3-0 goals.

DM Rao Sekmai team which was pushed back to the back foot in the first half, still found the going tough as the SSU team had barricaded themselves well, with cautious play till the final whistle. DM Rao player L Peter got a yellow card in the match.

In another match, KIYC Khetrigao pulled off a 2-1 goals win over YUFC Ukhrul. YUFC looked all set for smooth going when Yarupam Awuangshi enthralled the crowd with the opening goal in the 16 minute of play.

Though YUFC had taken the match to their grip, a loose end gave Ng Prem a chance to make a strike and he did so in the 71 minute to bring up the equaliser. Striking while the iron is hot, KIYC infused more zeal to its attack and soon consolidated when Yami Longvah stoke home the winning goal in the 77 minute for the victory on Tuesday.

In Wednesday's matches, MPSC Police HQ will take on AFC Thoubal in the first ground at 12:15 pm while UKB Churachandpur will face NACO Nambul Mapal at 2:15 pm.