A report issued by 3.5 collective stated that in almost all the Hill Districts in Manipur, poppy is cultivated en masse with full knowledge and acquiesce of the authority concerned. 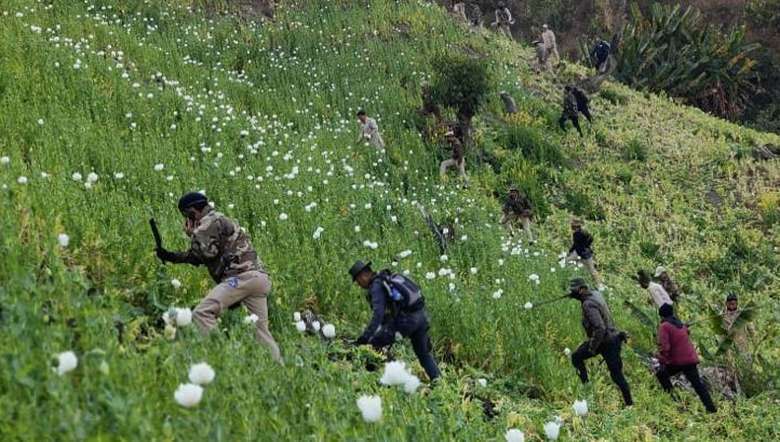 The Union Home Ministry has issued a directive to the chief secretary, government of Manipur to provide a suitable response to an applicant of the grievance raised over drug menace in Manipur.

The 3.5 Collective and Human Right Alert (HRA) had submitted their grievances through the PMOPG portal for necessary action to the state government to prevent Manipur from becoming the next Golden Triangle and in regards to the special trail case of 2018 on February 16 to Prime Minister Narendra Modi and Union Home Minister Amit Shah.

According to a report titled Magnitude of Substance Use, 2019 by the Union Ministry of Social Justice and Empowerment, the tiny state of Manipur with a population of less than 0.4 per cent of India has 14.22 per cent current opioid users.

The teenagers and youths are the most vulnerable and even adolescent girls are falling prey to drug abuse. This degradation of the societal fabric can have far-reaching consequences.

A report issued by 3.5 Collective stated that in almost all the hill districts in Manipur, poppy is cultivated en masse with full knowledge of the authority concerned. Although land holders can be booked under the Narcotic Drug and Psychotropic Substance Act, 1985 (NDPS), not a single person is arrested in connection with the poppy cultivation till date, it stated.

It stated that the drug usages and trafficking also have a direct relationship to the dynamics of structural violence in the state. The money earned by the drug-lords is leading to the deterioration of societal fabric and has been giving rise to crime and the economy of violence, it added.

It stated that a significant percentage of local populations’ income generation, directly or indirectly, becomes dependent on this economy. Its corrupting influence has weakened and corroded the vital institutions of the state, including the law enforcement agencies, the judiciary and the legislature, it added.

3. 5 Collective stated that the role of drug money during election and formation of government is widely talked about amongst the public. The illicit drug trafficking and narco-terrorism in Manipur have grown enormously in sophistication and volume and have undoubtedly emerged as a significant long-term security threats not only for the Northeastern region but also the whole of India, it added.

The report sent by 3.5 Collective mentioned of a multi crore drug haul case involving high profile operatives including minister Okram Henry; colonel Ajay Chaudhary; Seikholen Haokip son of TN Haokip MLA; chairman of Chandel ADC Lhukhosei Zou; Ningkhangam Awungsi; Wungreigan Awungsi and Kyaw Kyaw Niang (Myanmar national) and stated that none of the persons have been convicted till date. Due to the repeated leniency shown to the accused high profile persons, the general public of Manipur has lost faith in the system to curve the menace, it stated.

It also stated that when it comes to conviction, only the small fries involved are convicted by the court while the drug lords/main accused involved always managed to secure acquittal by using their links in the corridor of power.

This suspicion is further strengthened when chairman, Autonomous District Council, Chandel Lhukhosei Zou, who was caught red-handed with a huge amount of narcotic drugs from his official quarter, was summarily acquitted by the ND and PS court with a judgment of December 17, 2020, it added.

It further stated that many students’ unions, women groups, civil bodies and almost every right thinking citizen of Manipur is deeply agitated by this total breakdown of the system in as much as it is unable to convict the drug traffickers.

Vehement protests have been raging throughout the nook and corners of Manipur against the acquittal of Lhukhosei Zou, demanding the state government to appeal against the judgment in the High Court. Despite the constant police brutality and smear campaign to malign them as communal, the protest continues unabated for the last two months, the 3.5 Collective’s report added.

It is said that for almost half a century, Manipur has been a transit point for illicit drugs from the infamous Golden Triangle to India and beyond. In the last decade, the scenario has compounded with the en masse cultivation of poppy in the hills and opening up of manufacturing units in the state. The human, ecological, social, economic and political cost of the menace could be nothing but devastating.