Thokchom Radheshyam said that unsafe water can be the cause and root of many physical ailments. 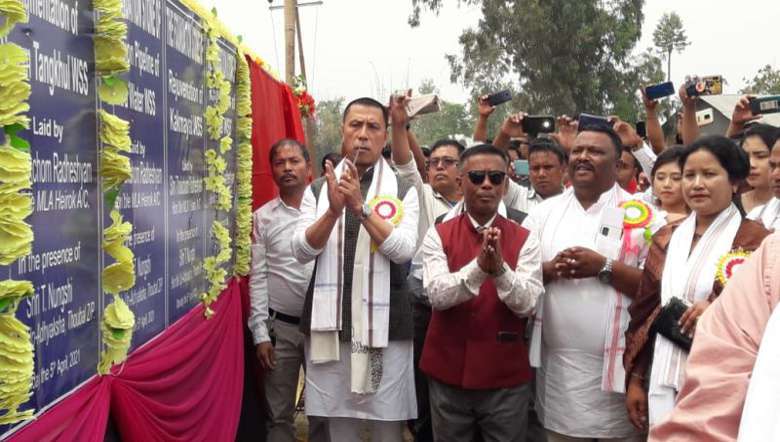 MLA of Heirok assembly constituency Thokchom Radheshyam on Monday laid the foundation stones for nine water supply projects which were selected for the first phase out of 14 projects worth a total of Rs 80 crore under Jal Jeevan Mission (JJM).

In his speech as chief guest at the foundation ceremony held at the community hall of Heirok part-I Umang Laikol, Thokchom Radheshyam stated that air and water are basic requirements of life; however, unsafe water can be the cause and root of many physical ailments, therefore it is imperative that everybody has access to potable drinking water. And so, with the objective that every household in Heirok has a Functional House Tap Connection (FHTC), the JJM project is being taken up under the leadership of PM Narendra Modi and CM N Biren Singh.

He also said that the first phase of the project for Heirok assembly constituency which is being undertaken has a budget of Rs 9 crore and the remaining five projects for the second phase have a budget of Rs 50 crore. Mentioning that the ministry has granted permission for the majority of labourers and skilled workers for the project to be people from the constituency, he remarked that people who have lost their livelihoods due to the COVID-19 pandemic will gain work again.

“A society with people living in peace and unity is my aspiration as an MLA, and so let us all refrain from all kinds of animosity towards each other as it will be bring only negative results,” he said appealing the masses to remain cooperative and make Heirok a place of peace and tranquility.

The sense of unity and helpfulness that can be currently witnessed between the people of Heirok is something to take pride in, Radheshyam continued, adding that he will strive for the cause of the common people till his last breath.  He also extended his gratefulness to the public for being able to initiate various developmental activities in the area stating that all credit should go to the masses since an MLA is no one but a public servant.

Mentioning some of the development projects that have been initiated such as distribution of old age pensions,  erection of electric posts and supplying gas connections to 3,000 households in the constituency,  Radheshyam asserted that he will do his best to ensure that each and every one receive the benefits. “Let us all work together hand in hand to develop the constituency and create a productive environment for the upcoming generation,” he urged.

The MLA also said that some of the development projects in the pipeline include extending the Heirok road to reach Inganglok, blacktopping 14 streets as a first phase, construction of an Engineering college at Khangarok amongst several others.

He further said, it is unfortunate that people are spreading malicious information on the developmental projects and crediting them to the previous MLA.

Due to the inefficiency of his predecessor, the assembly constituency still has lots of impoverished and homeless people, he alleged. Recounting how he had endeavored to develop a backward assembly constituency as a new MLA, Radheshyam made another appeal for co-operation amongst people with different political affiliations especially in the case of developmental activities and work together for an equally developed society.

The event was attended by members of Heirok JP, T Nungshi, president of BKP Heirok Mandal, Thokchom Chourjit along with other pradhans, members and former councilors.