Sanaton, 22, an MBBS student pursuing his 5th semester at RIMS, Imphal was reportedly found hanging on March 15 at his hostel room in a suspicious manner. 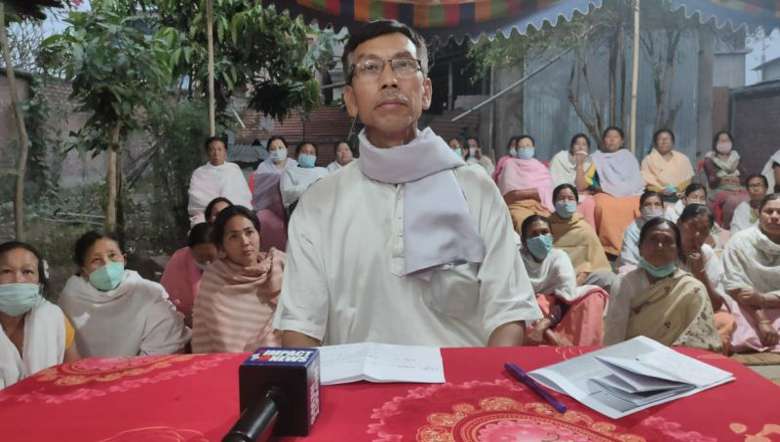 Father of late Sanaton Athokpam on Monday alleged that RIMS authority did not inform his family members about his son’s death on the day of the incident.

It is unfortunate that the authorities of RIMS are circulating press notes with fabricated information regarding the suspicious death case of my son, said Sanaoton's father Tikendra Athokpam while speaking to the media on Monday at his residence at Khurai Thangjam Leikai, Imphal East.

The press note circulated by the media advisor of RIMS claimed that the news of Sanaton’s death was informed to the family members on the day of the incident itself.

Tikendra said that his son’s body was lying unattended on the causality ward of RIMS for nearly one-and-half-hour as their family members did not get any information regarding the incident.

When representatives of the JAC and the family members approached to visit the director of RIMS, they were permitted to meet only the RIMS medical superintendent who does not have full authority of the institute, he said.

However, a condolence message from the RIMS authority was received on the following day through a local of Khurai after the incident took place, he added.

As the matter has become a social issue in a larger scale, Tikendra on behalf of his family members affirmed that their family members will stick to the decisions taken by the Joint Action Committee (JAC) ‘Justice for Sanaton Athokpam’ in demanding justice for his late son.

He further said that late Sanaton’s sister who is pursuing M Phil at RIMS was summoned by RIMS director to discuss regarding the issue on March 16; however, she told the director that she cannot take any responsibility as the issue is being handled by the JAC.

He reiterated that different forms of agitation will be taken up with support from the JAC, civil bodies, student bodies and the general public until and unless justice is served.

Sanaton, 22, an MBBS student pursuing his 5th semester at RIMS, Imphal was reportedly found hanging on March 15 at his hostel room in a suspicious manner.

Meanwhile, Thangmeiband United Club (TUC) has stated that they will be lending their support in demanding justice for late Sanaton.

President of TUC Pratap Leishangthem expressed their condolence over the suspicious death case of late Santon.

As a head of the institute, the RIMS director should announce full cooperation in any investigations taken up to find out the facts about the case of Sanaton’s death, he said.