‘No agreement reached between government and ATSUM’

Apropos the press note issued on Monday by the state government on its decision to conduct the ADC Elections by June 25,  ATSUM clarifies that the decision was one sided. 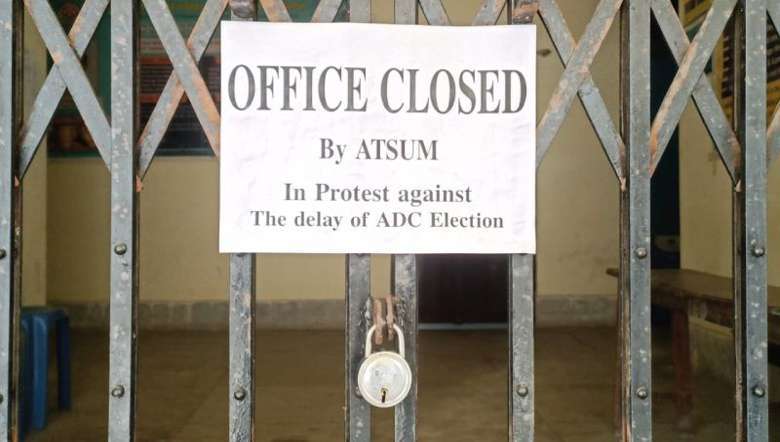 The All Tribal Students’ Union Manipur (ATSUM) has stated that no agreement was arrived at between the state government and ATSUM during the discourse held on Monday at the Conference Hall, TA and Hills department at 11.30 am.

Apropos the press note issued on Monday by the state government on its decision to conduct the ADC Elections by June 25,  ATSUM clarifies that the decision was one sided, stated a release issued by information and publicity secretary Khaiminlen Doungel.

As the meeting between the state government and ATSUM could not find any concrete solution, the ongoing agitation of ATSUM for demand for issuance of notification for general elections to the Autonomous District Councils will continue as announced, it stated.

Meanwhile, as a part of the proposed agitations, picketing of government offices were effectively carried out in Ukhrul district headquarters on Monday with complete lockdown of Mini Secretariat, ZEO Office, ADC office, Post office, Forest Office, and banks. No unwanted incidence, however, was reported.

Picketing of government offices was co-opted by the Tangkhul Katamnao Saklong (TKS), the apex body of the Tangkhul students' union.

Coming down strongly on the Manipur state government's alleged derailing of ADC elections, the apex bodies of the tribal students' union had decided to voice and made known their long pending demands by resorting to picketing of government offices and mass rallies.

As per the earlier communiqué issued by the ATSUM general secretary, it had proposed to launch a series of mass rallies at hill districts headquarters effective April 8 till 15 April.  The scheduled mass rallies will begin at Senapati district Head quarters which will be followed by Kangpokpi, Chandel, Ukhrul, Churachandpur and Tamenglong.

The apex body of the tribal student Union has been long demanding the state government to fulfill its charter of demands to hold the Autonomous District Councils elections in the Hill districts of Manipur.

Meanwhile, Joseph Pauline, deputy commissioner Ukhrul has reportedly left for Shirui-Khayang Phungtha road inspection along with minister Biswajit and MLA Alfred Kanngam. He is said to return on Tuesday.

In Kangpokpi district, Government offices were picketed on Monday as the All Tribal Students' Union Manipur (ATSUM)’s stir began in all hill districts of the state.

Picketing of government offices in Kangpokpi district headquarters was enforced by volunteers of ATSUM and various other tribal student bodies including KSO, TSA, TYA, etc. which endorsed and extended solidarity and cooperation towards the ATSUM's agitations.

The volunteers were also seen sticking a pamphlet which read, “office closed by ATSUM in protest against the delay of ADC election” in the gates and walls of each office.

Speaking to the media in front of DC office Kangpokpi entry gate after sealing it, spokesperson in-charge of ATSUM stir in Kangpokpi Henkai Singsit said that in line with the ATSUM’s decision to close down all government offices in the hill districts, ATSUM with its all federating units in Kangpokpi began picketing all the government offices today.

He said their act was part of the various agitations enforced by ATSUM in protest against the inordinate delay of conducting ADC election by the state government.

“Our message to the state government is that if it is truly committed to equal development of both the Hills and the valley, then ADC is the key towards development of hill districts.”