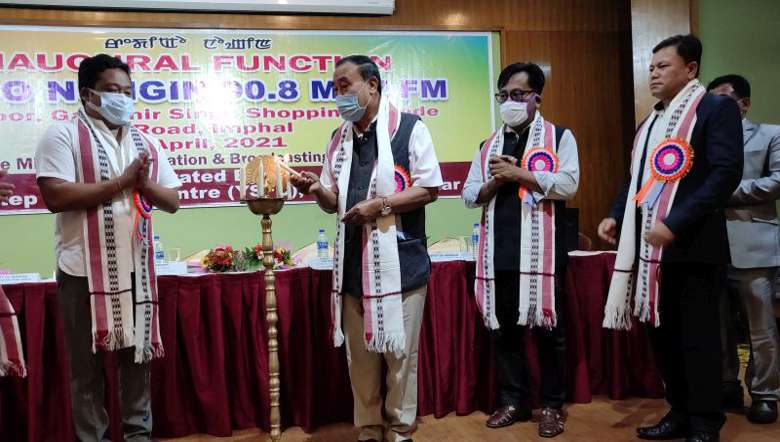 A community radio channel ‘Radio Nongin’ which is available at frequency of 90.8 MHZ FM was launched on Sunday at Hotel Classic Grande.

He said an application was submitted to the ministry of Information and Broadcasting in 2007 to start his radio channel. Due to its lengthy formal procedures, the final approval was received only in 2020 and broadcasting began in March, 2020; however, the prevailing pandemic had hindered in officially launching the station, he said.  Nevertheless, the channel served the listeners at its best level during the pandemic even though it was just in its nascent stage, he added.

He said that Radio Nongin broadcasts from 11 am to 6 pm. According to rules of community radio, direct involvement of the community should make up 40 per cent of the programme. Hence, people’s participation is highly needed to make this station a success, he added.

“Let this medium be the voice of the voiceless people and use it as an effective tool to make some changes in society. We are planning to include more interesting programmes in the near future,” he said, urging all to access his radio channel and make good use of it.

Attending the function as chief guest, MLA O Surjakumar Singh said that in this digital world, radio has been considered to be one of the outdated mediums but it is not in reality. This conventional medium is playing an important role in spreading awareness on various issues, preservation and promotion of art and culture of this state, he added.

He appealed to broadcast the radio without keeping any biases by giving equal attention and importance in every issue.

It may be mentioned that the station of Radio Nongin will be located at Gambhir Shopping Arcade, Imphal.