The ATSUM had resolved to resume various forms of agitations from Monday over the issue of ADC elections. 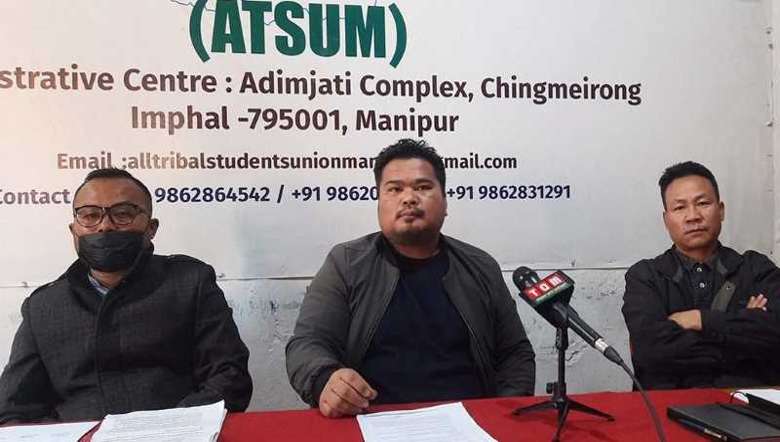 The All Tribal Students' Union Manipur (ATSUM), an apex body of tribal students' bodies in Manipur, has made a clarion call to the Kuki Students' Organisation (KSO) and the All Naga Students' Association Manipur (ANSAM) to extend solidarity and cooperation to its proposed agitations that will resume on Monday.

Disappointed with the state government's alleged apathy towards the charter of demands made over the Autonomous District Council election, the student body had resolved to resume various forms of agitations from Monday.

In its clarion call to KSO and ANSAM, ATSUM stated that the tribal populace of the state under its banner has been relentlessly striving for timely installation of the Autonomous District Council which is the basic democratic institution in the hills for the last six-seven months. The matter was consistently apprised to the governor, Hill Areas Committee and the state government as well via repeated memorandum, press communiqué and official discourses, it stated.

However, the voice of the tribal people remained unheard till today despite Hill Area Committee’s resolution/recommendation for timely election and an agreement inked between the state government and ATSUM for timely conduct of ADC election on several occasions, it added.

ATSUM appealed to the KSO and ANSAM to extend solidarity and cooperation in its proposed agitations considering the sentiments of the tribal populace.

As mentioned earlier, ATSUM reiterated that the Manipur state cabinet’s decision is ambiguous and it is an ideal mechanism to divide the tribal brethrens and derail the Autonomous District Councils Elections. Further, depriving the tribal populations of their given constitutional rights, the state government has been deliberately ignoring the agreed terms of the charter of demand placed before the state government.

The state government in the meantime invited the Demand Committee on Creation of Autonomous District Council (Pherzawl, Noney, Tengnoupal and Kamjong) for a meeting schedule on Monday at 2:30 pm in the Conference Hall of the Directorate, Tribal Affairs and Hills, Manipur with representatives of the government in connection with election of Autonomous District Council/Constitution of new ADCs Manipur.

Meantime, in response to the ATSUM’s call, the Joint Student Bodies Churachandpur reaffirmed its support toward the tribal student apex body while announcing that it will endorse and support the proposed stirs of ATSUM.

In the meantime, the Joint Students' Bodies of Churachandpur clarified that the ATSUM’s agitations do not include bandh or shutdown as published in some social media platforms.