Fire breaks out at Khwairamband market shed in Imphal

The fire gutted one shoe shop jointly owned by one Thingbaijam Arunjit of Moirangkampu Mayai Leikai and Md Sakil of Khurai Khomidok Masjid Maning, both from Imphal East district. 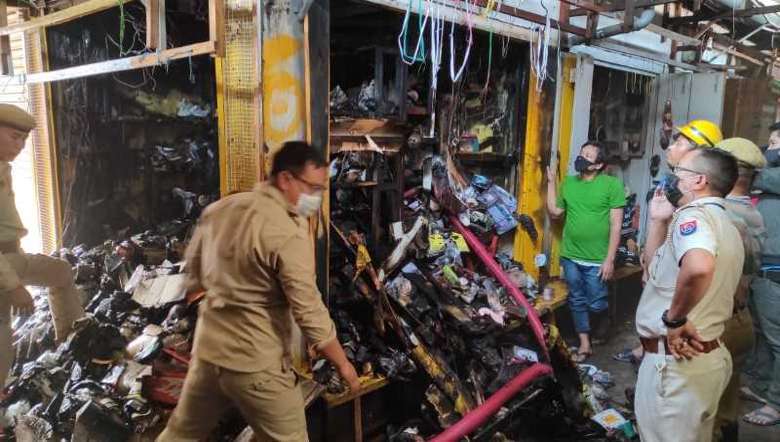 A fire broke out at Khwairamband temporary market shed in the heart of Imphal city at around 2 pm Sunday. There were no reports of casualty.

The fire gutted one shoe shop jointly owned by one Thingbaijam Arunjit of Moirangkampu Mayai Leikai and Md Sakil of Khurai Khomidok Masjid Maning, both from Imphal East district.

It is reported that shoes worth around Rs 7 lakh in total were damaged by the fire.

Speaking to the media, joint director Manipur Fire Service Laishram Nabachandra Singh said with urgent response from the fire service the fire was extinguished in time preventing much damage. The fire service suspects that the fire might have been caused by an electric short circuit, he added.

Nabachandra said someone reported the fire service at the same time that another fire broke out at Cheiraoching hillock. But due to inconvenience in finding a route to reach the spot, the fire service personnel were trying to extinguish the fire through alternative means by taking assistance from the locality.

He said most fire-related incidents are caused by carelessness and recklessness. The people should become more cautious to prevent such unwanted incidents from taking place.

Responding to the media, he said that at present, the Manipur Fire service has the capability to handle three simultaneous fire outbreaks at different places; however, it will be hard to provide services if there are more than three incidents due to lack of manpower and machinery, he added.

Nabachandra appealed to the people that if they cannot give assistance during the time of any fire, then they should let the fire service personnel carry out their duties instead of interfering. The commuters must clear the path for the fire service vehicle while on its way as saving a minute could save a life, he asserted.