The Chatric village authority and Chatric student Union in its recent resolution had resolved to ban all sorts of hunting, killing of wild species and destruction of forests resources in the areas. 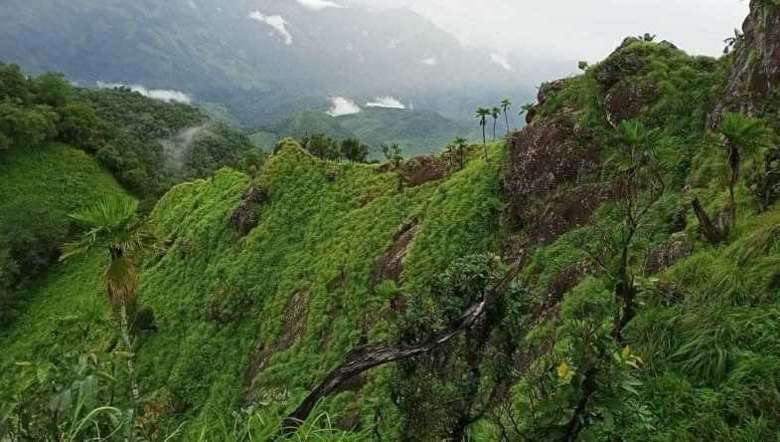 Situated at the extreme east of Kamjong district, Chatric village has the potential to become one of the top tourist destinations in the state. It is home to famous Angkoching peak, Sivathei (King Chilli) and variety of indigenous fish species among others.

Given its close proximity with Myanmar and lush green forest, which is home to many flora and fauna, arguably has become a rare sight in a state constantly vexed by deforestation due to poppy cultivation, forest fires among others.

The thick forest cover amidst the eye-catching trees of various shapes and sizes is attributed to the slow penetration of inter-district and inter-village roadways and is a blessing in disguise for the areas. Today, the village has better connectivity.

One striking feature of the peak is the majestic Kaseorakugn Lugnva located behind Angoching peak (Choki Kaphugn in local dialect). This large unique rock structure is given the name ‘Kaseorakugn Lugnva’ as it resembles a turtle. ‘Kaseorakugn’ means turtle in local Chatric dialect and ‘Lugnva’ means a huge rock.

Another scenic spot is the stadium rock. The rock looks like a sprawling stadium. Fishing, agriculture and U-marok plantation are the main source of income for the locals.

The annual turnover from the production of Sivathei differs from year to year depending on the yield. Production during bumper harvest comes to 100 plus tins, fetching around 4 lakh, and in bad times it comes down to 10 - 20 tins, reducing their annual income to 40 - 80 thousands. Sivathei is suitable in hot climates.

The environment conscious youth could do a lot in this regard so that pristine forest is conserved, protected, and promoted thereby creating sustainable livelihoods could be the way-out.

Speaking exclusively to the Imphal Free Press, Cimsor Phinao said that Angkoching peak is home to many wild animals including elephant, wild boar, monkey, wild cats, deer, hornbills among others. Elephants come from Myanmar side, he said.

Fish is another main source of income for the villagers. Sana-lok and Numban lok are their two main river courses. The two river courses converge at certain intersections and form into a bigger one and finally flows down the kabaw valley in Myanmar. It could definitely emerge as a tourist hot spot.

As part of the wildlife conservation measures, the Chatric village authority and Chatric student Union in its recent resolution had resolved to ban all sorts of hunting, killing of wild species, and destruction of forests resources in the areas.