'Promoting a sense of patriotism among the youths of the state would help in creation of a better society'. 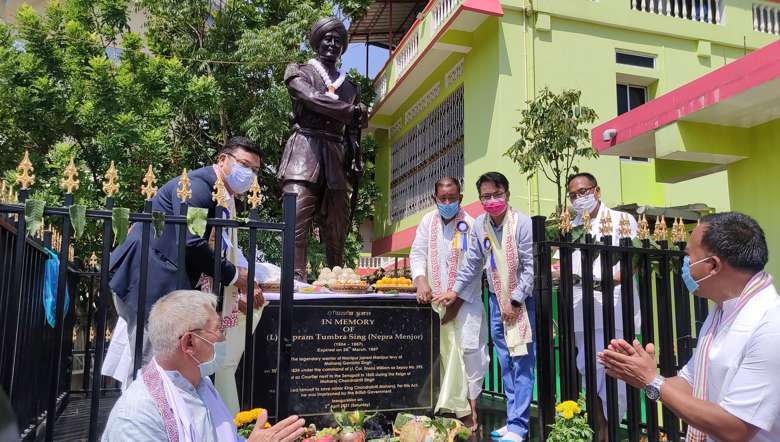 A statue of Nepra Menjor was unveiled at Sagolband Nepra Menjor Leikai in Imphal West on April 3, 2021 (PHOTO: IFP)

Speaking at the occasion as chief guest, director, art and culture Ngangom Uttam Singh said promoting a sense of patriotism among the youths of the state would help in creation of a better society.

The meaning of patriotism can change in accordance with time, he said. Those who sacrificed their lives for the motherland were considered as patriots during the pre-independence period, he added. But as the state got its freedom, there is no longer any fear of it being controlled by any external agencies or factors; therefore, the youth of the state should ponder upon patriotism as doing something good for the society, he said.

“Taking up initiative to remember our freedom fighters and martyrs by the present generation is very essential. This would help in immortalizing the brave freedom fighters of the state and it would ultimately promote a sense of patriotism to the future generations,” he stated, lauding the local clubs of Sagolband Nepra Menjor for taking the responsibility of erecting the statue of Nepra Menjor.

Concerning the drug menace of the state, Uttam said drugs issue cannot be removed from the state without the support and cooperation from masses. It is high time both the government and local clubs fight the drug menace collectively, he asserted.

He also encouraged every youth of the state to develop entrepreneurial ideas instead of just focusing on the government jobs. Except Assam, most of the Northeastern states are still lagging behind in the entrepreneur sector, he pointed out, adding the state will bear no benefits from the ‘Look East Policy’ when it is implemented if the state continues to neglect developing entrepreneurship skills.

It may be mentioned that the historical figure Nepra Menjor whose real name is Nepram Tumbra Singh, was a legendary warrior of Manipur. He joined the infantry regiment, ‘Manipur Levy’ of Maharaj Gambhir Singh on July 30, 1824 under the command of lieutenant colonel Enens Williams as a sepoy. He joined as courtier in 1860 during the reign of the then king Maharaj Chandrakirti Singh. He made a sacrifice to save the young king Chandrakirti and for his act, he was imprisoned by the then British government for eight years.