Sanaton, an MBBS student pursuing his 5th semester at RIMS, Imphal was reportedly found hanging at his hostel room in a suspicious manner on March 15 morning. 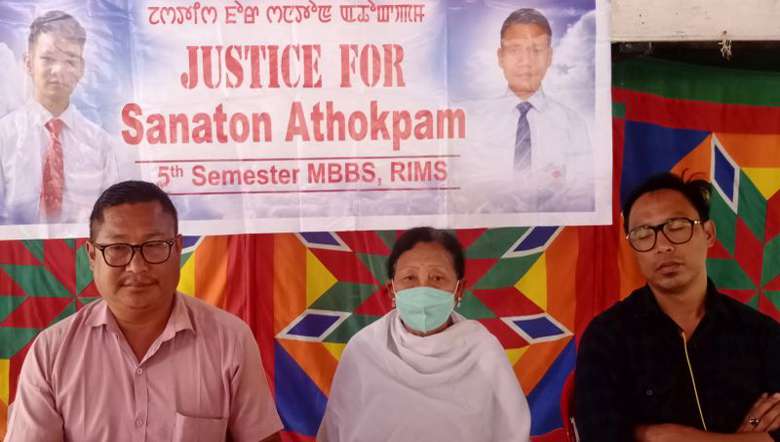 Joint Action Committee (JAC) ‘Justice for Sanaton Athokpam’ has raised suspicions that the case of late Sanaton may have been tempered and alleged that a fake suicide note on his phone could have been manufactured.

Twenty- two-year-old Sanaton, son of Tikendra of Khurai Thangjam Leikai, an MBBS student pursuing his 5th semester at RIMS, Imphal was reportedly found hanging at his hostel room in a suspicious manner on March 15 morning.

According to the status of the case and statement given by the superintendent of Imphal West police, it seems like the police are trying to manipulate the evidence of the case, alleged convenor of the JAC M Loyalakpa while speaking to the media in Imphal.

Moreover, the police superintendent also said that there were no records of outgoing and incoming calls in both the mobile phone and the tablet of late Sanaton since one month, he said.

The convenor also questioned the reason for not registering an FIR regarding the suspicious death case of late Sanaton, though post-mortem was conducted on March 16.

Asserting that not a single authority of RIMS and college friends of Sanaton have come to visit his parents till date, he said there is a huge suspicion that some highly influential individuals are stopping the authorities and friends from visiting late Sanaton’s family members.

Regarding the suspicion, he cited the incident of announcing the death as a suicide case according to post mortem report by an individual in social media ahead of conducting the post-mortem.

It is unfortunate that the state government has not taken up any legal action against the individual who was trying to mislead the case in social media despite several requests made from the JAC, he added.

The state government taking the case lightly is an act of inviting the JAC to take up severe forms of agitations, Loyalakpa said while drawing the attention of chief minister N Biren in delivering justice for late Sanaton.

The JAC also demanded immediate suspension of RIMS director A Shanta and the warden of the hostel. The JAC is all set to take up different forms of agitation by joining hands with the civil and student bodies of the state until justice is delivered to late Sanaton, the convenor added.

The JAC had also announced to stage a mass sit-in protest on Lamlong to Pangei stretch on Saturday.

‘Culprits involved in death of Sanaton must be booked’