The 36-hour bandh came into force from 6 am Thursday morning along National Highway 2. 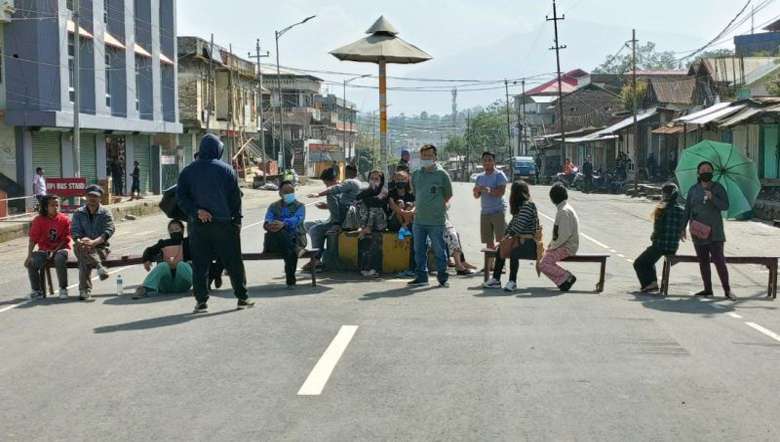 Kangpokpi civil voluntary organisations on Thursday stated that after a joint meeting of all the CVOs, they have decided to relax the ongoing 36-hour bandh in view of the importance of Good Friday and considering the appeals of in-charge Minister Losii Dikho and MLA Nemcha Kipgen.

The civil bodies also unanimously resolved that the Superintendent of Police Kangpokpi shall be transferred immediately and the arrested volunteers be released without any conditions.

They alleged that the SP’s incompetency in dealing with law and order peacefully in the district could be dangerous for the people in the future while alleging that his forcefully dispersing the protestors by using Commandos is not acceptable. Such inhumane attitude on the part of the District head of police department will not be tolerated by the people, they said.

They resolved that the volunteers arrested by the Commandos this afternoon shall be released unconditionally.

The 36-hour bandh came into force from 6 am this Thursday morning along National Highway 2. All business establishments were closed and vehicular movement especially loaded trucks, passenger services, etc. along the highway came to a standstill while normal life was badly affected.

Volunteers were seen enforcing the bandh at various locations at Taphou Kuki, Kangpokpi district headquarters Keithelmanbi, Saparmeina, Motbung and Gamgiphai. Many people were also seen walking with their luggage. However, those exempted from the purview of the bandh, including emergency services, press and media, airport and religious related matters, were strictly checked and allowed passage if found genuine till noon.

However, no exemption was entertained from afternoon as the volunteers intensified the bandh after Commandos deployed along the highway allegedly assaulted seven volunteers including KSO Sadar Hills social and culture secretary after being arrested near N Songlung under Gamnom Saparmeina Police Station.

Kangpokpi civil bodies spokesperson, K Songreng Kom told the media at Keithelmanbi that the Commandos assaulting the bandh volunteers sparked anger and they intensified the bandh. Earlier in the morning the bandh was enforced peacefully and calmly without any aggressiveness on the part of the people, he added.

He alleged the government knows that commandos were never welcomed in the hill district but they were intentionally deployed to assault and harass the peaceful protestors as was always attempted by the government.

It may be recalled that the Kangpokpi district civil bodies had on March 19 conveyed the state government of their resentment over the alleged 'disturbing' transfer and posting of officials in Kangpokpi district and demanded immediate redressal within a week.

After the dateline of the stipulated ultimatum, the civil bodies in a press conference held at Kuki Inn Imphal had announced 36-hours total bandh in Kangpokpi district from 6 am of April as the government failed to respond positively to their demands within the time frame.

On Wednesday, the district minister in-charge Losii Dikho met with the representatives of the civil bodies but could not come up with a solution and conveyed their decision to the chief minister after he met him in the evening.

Minister Losii Dikho reportedly relayed the chief minister’s appeal that whichever in the charter of demands that can be addressed immediately will be materialized at the earliest while remaining others shall be discussed later while appealing to withdraw their proposed bandh.

The civil bodies then conveyed their stand that they will call off the bandh only when they receive the orders of which the government considers their demands to be addressable at the earliest.

However, not a single order was issued yet, as stated by the civil bodies while adding that they are compelled to go ahead with the bandh.

Speaking to the media, spokesperson K Songrei Kom said that despite Kangpokpi people keeping its faith upon the government for bringing overall development of the district, the state government continued its step motherly treatment upon them by neglecting their demands for smooth growth and development till date.

The student body also said that people of Kangpokpi will not welcome and allow commandos anytime in the district and warned that it will be compelled to take up the issue separately if the state government continues to deploy commandos in Kangpokpi district.

Enraged with the highhandedness of the Commandos, womenfolk and volunteers were seen blocking the highway in the heart of Kangpokpi town till late night.

Meanwhile, civil body representatives and the police department authorities were having a meeting at KSO Sadar Hills Administrative office building at Kangpokpi town over the alleged assault meted out to its social and culture secretary and few other volunteers by the commandos. The meeting was underway till the time of filing this report.