Despite scorching sun rays, the world starts to resemble a hollow of darkness or a black hole 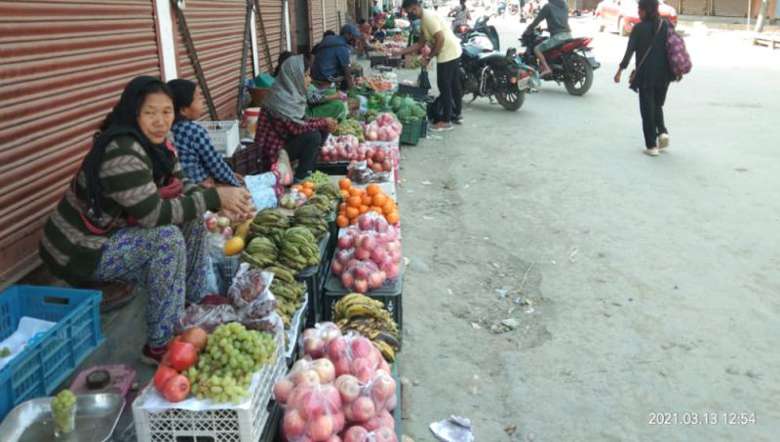 Each morning, though get started with optimism in heart, turns into a frustrated one after going through the state of the society as reflected in the newspapers --- so much intolerance, insensitivity, violence, muscle-flexing and worshipping of the muscle-flexers all around; be it in social or political context! Despite scorching sun rays, the world starts to resemble a hollow of darkness or a black hole!

But hard duties of life --- be it on the domestic or official front --- would have to be accomplished. So despite heavy hearts, no option but to proceed towards the vegetable market!

A poor woman of around mid-50s with poverty written all over the appearance was selling raw jackfruit. Since she is a newcomer in the market, previously I didn't purchase anything from her. This is the first time I approached her and pointed out my desired jackfruit. Since it weighed 600 gram with the selling price being Rs 50/- a kilo , so obviously I would have to pay Rs 30/-. After she cut the fruit to pieces , I handed her a Rs 50/- note. But I was surprised to get a return of Rs 25/- instead of Rs 20/-! As I pointed it to her , she realised her mistake and took back the coin of Rs 5/- from me. As I started to move on, the poor seller called me from behind. As I turned my face towards her , the lady gave a divine smile and raising her hand exclaimed  "May God bless you"! My all sorts of frustration vanished in an instant with the world getting lightened up in pure joy! What a magic in her words  --- embedded with moral strength of unadulterated blessings emanating from the deepest core of the heart!

Though extremely delighted at first, but thereafter understood that there lies hardly any surprise in such selfless gesture; after all I am standing on that island of sanity named Sukhchar!

Yes, Sukhchar -- the locality around us with the flowing Hooghly on its west. It hosts a large market of vegetables, fish meat fruits etc. Though it is hardly a six to eight minutes walk to the market, a very busy chaotic dusty road needs to be crossed negotiating "never ending" traffic.

But after tackling the speedy buses and inhaling the fumes from lorries; as soon as I step into the market; a floodgate of happiness and peace instantly invades my soul!

Majority of the sellers sit right upon the ground with their cauliflower, brinjals, tomatoes, spinach, potatoes. Most of them hail from remote villages bringing their produce through the earliest available trains. The sellers are affiliated to all social spectrum ---  Hindus, Muslims, male, female, young men of 18 to 70-plus senior citizens!

But despite all possible variations, one thing is common. All are extremely humble, polite dignified smiling gentle and 100 per cent honest individuals.

Sometimes sporting teams face "problems of plenty"! All are equally talented performers with a nice track record ---- whom to select, whom to omit! Similarly I find myself at sea whom to approach! All are so nice, but I can't purchase from all! So the cabbage is brought from X, the radish from Y, ginger from Z!

Now there is an old man from whom I rarely do purchase. Yet the man never desists from giving me a gracious smile despite knowing that I will approach him hardly once or twice a year! His body language suggests that personal relationships are more important than business one!

Another  rural youth sits with few items like beans, pumpkins,  capsicum which are not regularly consumed by us. So I am a rare visitor there. But every time he greets me and lovingly demands the purchase of items from him. Smilingly I have to refuse as those are not my requirements. One morning I saw him selling neem leaves during my exit from the market.  As usual he called me. Now a bunch costs Rs 5-10 in average depending upon season. But I was left with only a single 100 Rupee note only. As I conveyed to him about my inability to provide small change; he handed me a  bunch, took the 100 Rupee note and went to a neighbouring shop to seek smaller denominations. On return, as soon as he handed me a total of Rs 90, I started towards home. Hardly had I taken two steps, he called me from behind "Where are you going? Take the paisa"! As the astonished me turned back, he now forwards me a Rs 5 coin! Actually the cost of the bunch was Rs 5 and I assumed it to be of Rs 10! What a specimen of honesty! He could have easily refrained from calling me back and pocketed Rs 5 which was entitled to me! What a contrast to those privileged Metro Railway commuters who sneak through the entry gates by purchasing a single token of Rs 10 despite travelling duo! All for the sake of "saving" another Rs 10! My head bows down in respect to the lungi-clad poor neem seller!

A year ago, I purchased brinjal of Rs 20 and handed the lady a Rs 50 note. Promptly she returned me a Rs 10 note and started searching her bag to make further return. But she hands me Rs 30 now! When I pointed out "You had previously given me Rs 10. Now you should give me Rs 20, not Rs 30"; smilingly the poor lady replied "There was a Rs 10 note between that Rs 50 note which you handed to me. So that time I returned that extra 10-rupee note. Now I am returning the change of Rs 30"! The overwhelmed touched myself simply wondered "If there is a heaven on earth; it's here it's here it's here"!

So whenever I visit the market, all my depression and frustration simply vanishes into thin air and I return with a lot of  oxygen of optimism and hope in this dog-eat-dog world. In Bangla, "Sukh" means happiness and "Char" means riverine island. Indeed the market lives by its name with an island of divinity amidst deluge of intolerance and violence all around.

Without questioning the shower of good wishes for the New Year from all possible quarters, the fact remains that a brand New Year holds no special miracle of its own that as soon as the new calendar begins, all things good will start flooding all spheres of the society!

Actually a lot of fundamental transformations are required to ensure a happy New Year. But who will ensure it? Of course we the human beings and the ball is absolutely in our court with my idol being the rural poor sellers of Sukhchar where the spirit of bonhomie warmth honesty dignity divinity simply rules the roost.

If this positive spirit gets emulated everywhere, the society would certainly attain true civilization at last and all days would turn as the first day of a New Year with much optimism in our souls.