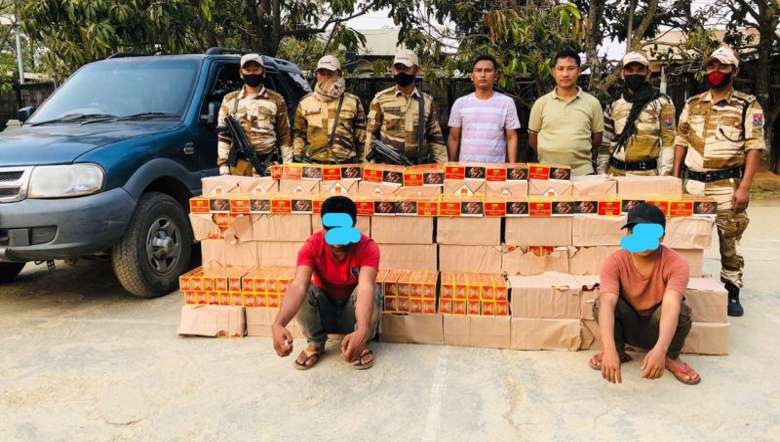 Thoubal District Police under the supervision of SP Thoubal S Ibomcha seized a large number of cigarettes of different brands from various parts of the district on Thursday.

As per police sources, a team of Yairipok Police Station acting on a specific information, conducted frisking and checking at Yairipok Wangkhem area near Yairipok Universal College on Thursday Morning.

As a follow up action, a combined team of Yairipok Police led by SDPO Yairipok K Dhananjoi and officer in charge inspector Md Riyajuddin rushed to the house of one Laishram Brojen Singh, 51, son of Late L Rabei Singh of Yairipok Wangkhem Mayai Leikai who is the owner of the car and conducted a house search.

Eight carton boxes of WIN cigarettes containing 50 packets each and 70 packets were seized.

Furthermore, the cigarette items and the involved A Star car were formally seized and Laishram Brojen,the owner of the WIN cigarettes was arrested.

The arrested person along with the seized items was being handed over to SP Custom Preventive Force Pallel Manipur for further necessary action, the source added.

Meanwhile, acting on specific information, at around 10 am on Thursday, teams of Thoubal Commando conducted frisking and checking at Phanjakhong under Nongpok Sekmai Police Station area near Laikon.

Furthermore, the cigarette items and the involved Safari car were formally seized and the owners of the ‘Gudang Garam’ cigarettes were arrested.

The arrested persons along with the seized items were being handed over to Nongpok Sekmai Police Station for further necessary action.

Similarly, at around 11am of the same day, a team of Nongpok Sekmai Police Station under the supervision of its OC Inspector Premkumar mangang conducted frisking and checking at Yairipok Mayai keithel road near Kakmayai Lamkhai.

The police team arrested the two drivers and seized the above articles along with the two DI TATA from the spot by observing necessary formalities.

The arrested persons along with the seized items are being handed over to SP Custom Preventive Force Pallel Manipur for further necessary action, said the source.