Vungzagin Valte exhorted the students to make effective use of the solar lamps as one of the study materials as they are actually ‘Study Lamps’. 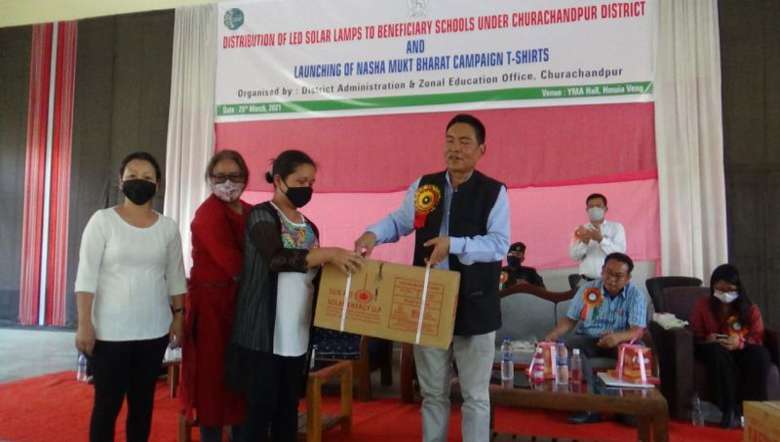 LED solar lamps were distributed to the beneficiary schools in Churachandpur, under the Anti-Drug campaign by the Union Social Justice and Empowerment Ministry, on Thursday. It was followed by launching of T-shirts of Nasha Mukt Bharat Campaign at YMA hall of Hmuia Veng, Churachandpur district.

The programme, organised by District Administration Churachandpur, was attended by Minister of TA and Hills, Vungzagin Valte as chief guest. MLA of Singhat assembly constituency, Ginsuanhau Zou and MLA of Saikot assembly constituency, TN Haokip were the functional president and guest of honour respectively. It was also attended by director of MANIREDA, L Manglem Singh as special guest while additional DC, Khaikhopau Ngaihte was the chief host of the function.

A total of 6,283 solar lamps were handed out to schools in each blocks namely Churachandpur, Henglep, Singhat and Samulamlan, including government and private schools. The solar lamps were provided on submission of student's Aadhaar card. The officials present also jointly launched the anti-drug T-shirts on the occasion.

L Manglem demonstrated to the student how to use the lamp which is more than a solar lamp but can be charged through electric power. The usefulness of the solar lamp will be a boon for the students particularly those from the villages, he added.

TN Haokip in his speech said that he was pleased to see the smile on the students’ face after the one year of COVID-19 pandemic lockdown. In spite of improvement in power supply, power shutdown   happens regularly and so solar lamps are much needed to avoid distractions in academic activities, he added.