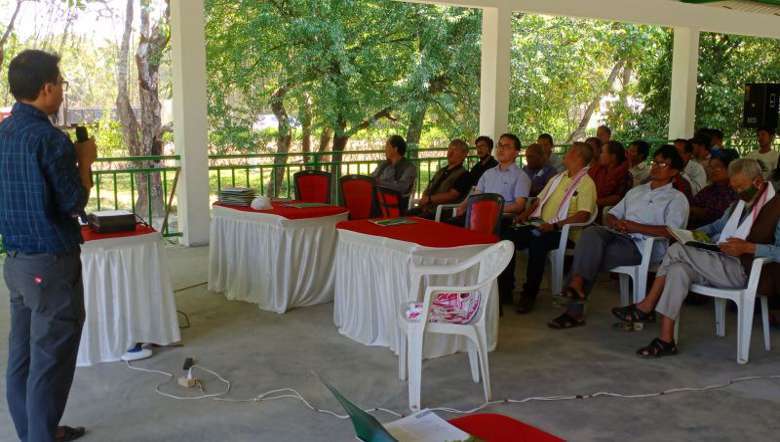 At the programme organised by the Balipara Foundation, chief of Phayeng village Angom Toyai  Chakpa alleged that the state government and the forest department officials are responsible for the degradation of forest in different parts of the state

Toyai said if the officials of the forest department work sincerely without any negligence, many trees could have been prevented from being cut down by encroachers and many ecological forests would not have been destroyed.

Concerning the government’s projects for saving and preserving the Loktak Lake, he said it would not be possible until and unless the forest range from Mount Koubru to Mount Thangjing are protected, preserved and conserved as the hills are the water sources for Loktak Lake.

Chairman of Chakpa Phayeng Carbon Positive Eco-model Village Angom Gajendra said that years ago, the surrounding of Phayeng village was once deforested due to which, the villagers began to suffer from warm temperatures, shortage of water and certain illnesses.

The management of the surrounding forest in a community level was done successfully without any support from the state government, Gajendra added.

Asserting that Phayeng village has found the means to maintain and enhance their livelihoods while continuing to protect and conserve their natural assets, she said the success story highlights the challenges and barriers to forest management and restoration in Manipur.

She said the foundation through this platform also envisions to work closely with the indigenous communities of Manipur through its flagship project ‘Rural Futures and Naturenomics’ to ensure a sustainable future for the state and celebrate the tribal conservationists as the custodians of the natural landscapes.

The future initiatives that the foundation looks forward to incorporate and implement are community based natural resource management, biodiversity conservation, documentation of traditional knowledge, and enhancing livelihoods, Joanna said.

“The forum believes that coordinated actions with the community leaders will help us bring ecology back to the economy, and through cooperative leadership, actions can be taken for creating a sustainable and resilient future,” she added.

The Phayeng Village has been accorded with the as a Carbon Positive Eco-Model village tag that adapts climate vulnerabilities through conservation efforts that are mainly linked to the belief that the forest is a sacred grove.

Surrounded by three densely forested hillocks and situated near foothills of Kangchup Hill ranges, the main occupation of the villagers is agriculture, animal husbandry with majority of piggery and brewing of liquor.