The 14th edition of the MSL 2021 was formally opened by managing director of MSPCL, Nandeibam Sarat Singh along with several government and AMFA officials. 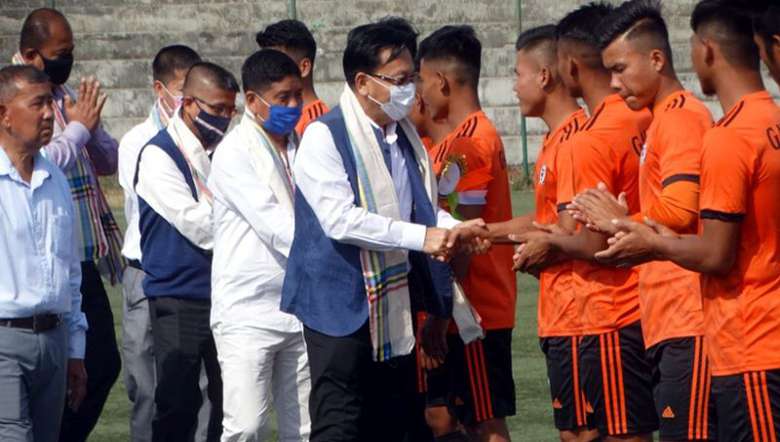 KIYC Khetrigao started off their league campaign with 3-2 goals win against GSC Churachandpur in the opening match of the 14th Manipur State League 2021, sponsored by Kh Joykisan Singh and organised by All Manipur Football Association under AFC and AIFF at Artificial Turf Lamlong Thongkhong, Imphal East.

The 14th edition of the MSL 2021 was formally opened by managing director of MSPCL Nandeibam Sarat Singh along with several government and AMFA officials.

The match was a tightly contested match but KIYC Khetrigao stole the show in the 27 minute when Surjakanta Singh came up with the league first goal for the lead in the first half.

Resuming the second half, GSC Churachandpur reworked their strategy and gave a befitting fight back seeking the equaliser. However, KIYC player Somishon lurking in the danger zone of its opponent goal, latched on a loose ball to slam home the second goal in the 51 minute to boost the scoreline to 2-0 goals.

Making much effort, GSC Churachandpur finally got their opening when Mangioel managed to snake through KIYC defence to push home his team first goal in the 54 minute, to boost the morale of teammates. The frequent raids by KIYC paid rich dividends when Ng Jenison struck the third goal in the 60 minute to heat up the tempo of the game.

As anticipated, GSC Churachandpur made use of the remaining minutes of the match with multitudes of attack and it was Singdoulein who scored his team second goal in the 72 minute but that proved not enough as no further goal came forward in the latter stages of the game. KIYC player Somironggui got a yellow card in the match for dangerous play from referee Sh Suresh.

The next matches on Wednesday will have SSU Singjamei taking on Neroca FC at 12:15 pm while in the second match, MPSC Police HQ will play UKB Churachandpur at 2:15 pm.