The nurses of JNIMS Hospital demanded implementation of 7th Pay, old pension scheme for employees who joined before 2004, creation of higher nursing post, implementation of MACP, revision of nursing allowance in the 7th Pay and provision of uniform or dress allowance to nurses. 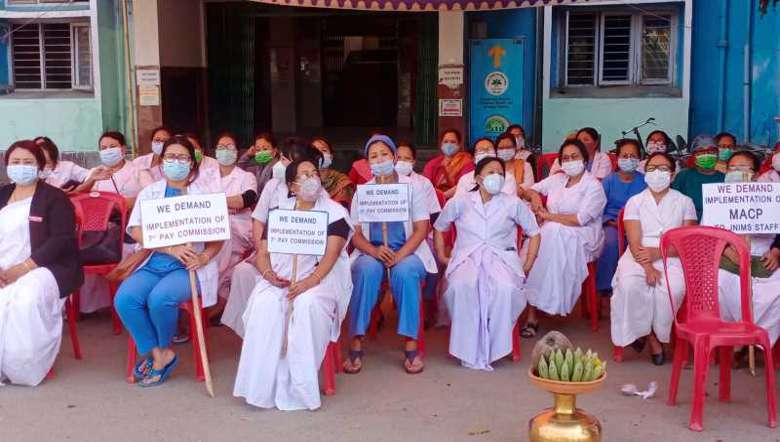 JNIMS Hospital nurses under the banner of Trained Nurses’ Association, JNIMS on Monday staged a sit-in protest at the hospital campus in Imphal East, reiterating several demands, including implementation of the 7th Pay Commission for staff nurses of JNIMS.

Voicing the demands, the nurses have made frequent appeals to the JNIMS authority. However, till date, the authority remained deaf-ear to their demands, said general secretary of Trained Nurses’ Association, JNIMS, Ph Janapriya Devi while speaking to the media.

When the nurses of the state Health department are enjoying 7th Pay scale, it is unfortunate that the nurses of JNIMS who are discharging their duty equivalent to those nurses are still fighting for implementation of 7th Pay, she said.

The general secretary said such delaying tactics of the state government in implementing the 7th Pay is like considering nurses of JNIMS as “valueless.”