The Sheikh Brothers Seenaipung workshed for Muslim women at Kshetrigao in Imphal East aims to preserve and conserve culture and tradition of the community. 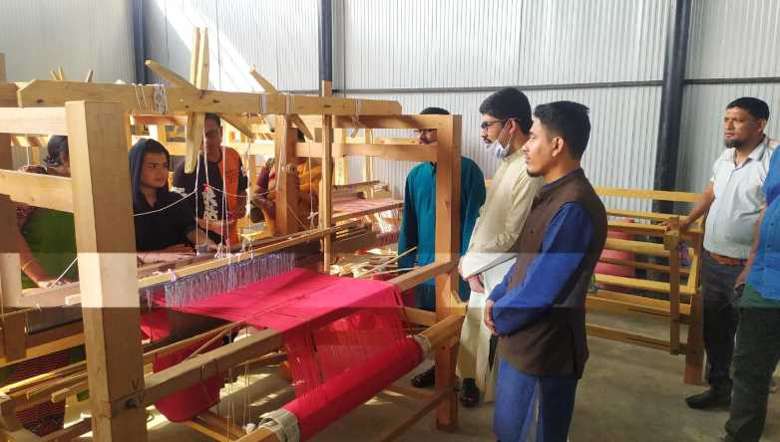 In an effort to empower Muslim women of Kshetrigao in Imphal East, Manipur and generate income for them, a workshed - Sheikh Brothers Seenaipung – has been set up at Kshetri Bengoon Awang Leikai. The first of its kind, the workshed aims to help generate income for Muslim women through handloom and handicraft works. It also aims to help conserve and promote the culture and tradition of the community in the area,

There are around 30 small villages, mostly Muslim-dominated, in Kshetrigao. And, most of the women are illiterate or school dropouts. Some of them are engaged in small-scale handloom or handicraft production in their homes.

The hidden talents of Kshetrigao women could be boosted through the Seenaipung initiative, EA Noor Rahman Sheikh, director (Economic Diplomacy), Sheikh Brothers Seenaipung, said during the inauguration of the workshed on Saturday.

Seenaipung provides a working atmosphere for weaving, tailoring, and making handloom and handicraft products and help generate income for women, the director said. One of its main objectives is to promote the culture and tradition of the state at the national and international levels, he said.

Noor Rahman Sheikh said the inauguration of the workshed was organised after completion of a one-month training course for weaving, he said.

Seenaipung workshed in Kshetrigao provides a place for women to generate their own income, Hassan said.

In the Muslim community, many talented women are there and are working from their own homes or by opening a tailoring shop, he said, adding such women could channelise their talents through Seenaipung.

The women of Kshetrigao could generate income from Seenaipung by producing handloom and handicraft products, which in turn will help in promotion of culture and tradition of the state, he said.

Their production could be sold at the international levels, he added.

At the initial stage, people from only four villages have undergone training. The remaining 26 villages in the area are expected to join the training for women, he said.

One of the certified members, Ruhani said it was for the first time a door for generating income has been opened for the Muslim women of Kshetrigao Muslim area.

She said many women are there earning money by opening small tailoring shops or weaving at home. There are no proper places to sell the products on their own so they sell them by contacting those who are in the business of selling them, she said.

Most women weavers are selling their products locally. Most Muslim women after completing class 10 or when they drop out of school opt for learning the art of weaving or tailoring. Many women of the area who do not go to school also take up weaving or tailoring to earn their livelihood.

However, their products are in small scale and are for self-use or to be sold in small local markets, Ruhani said. She said that the inauguration of the workshed will help women of the community in the area who wish to earn and make a living. They can also contribute in conservation and promotion of their culture and tradition.