The 53-Tamenglong assembly constituency has been lying vacant after former MLA Samuel Jendai resigned and a court case is pending till date since last year. 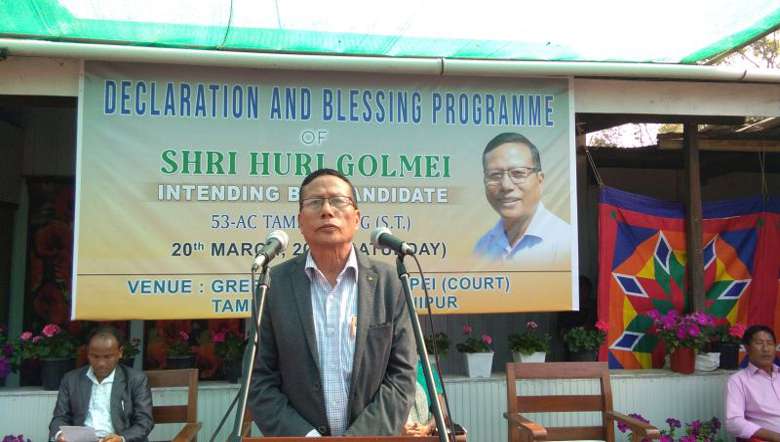 As a preparation for the forthcoming byelection, Greenland village Authority Tamenglong on Saturday organised a declaration and blessing ceremony for intending BJP candidate Huri Golmei in Tamenglong assembly constituency.

It may be mentioned here that the 53-Tamenglong assembly constituency has been lying vacant after former MLA Samuel Jendai resigned and a court case is pending till date since last year.

The declaration and blessing programme was held at the Greenland village Authority Tamenglong office where the ‘Peipou’(official) of its village P Digai made the declaration to support and cast vote for Huri Golmei in the forthcoming election.

The declaration note was signed by RK Kingliamang and Wilungbou Newmai chairman and secretary of Greenland village authority Tamenglong Ward No II and part V respectively.

Speaking on the occasion, intending BJP candidate Huri Gonmei expressed his trust and sincere gratitude to the people of Greenland that the whole local populace will cast vote for him.

“Today, I came here not to hold a campaign but request all present members to spread the message that Huri Golmei is God fearing, intending BJP candidate who works towards better living standards and prosperity of Tamenglong,” he said.

He said that if he wins the forthcoming byelection or the general election, he will work sincerely for the welfare of the people.