Demand for inclusion of Meitei/Meetei community in ST list intensifies

The Schedule Tribe Demand Committee, Manipur condemned the state government for not fulfilling the demand and staged a sit-in protest in Imphal. 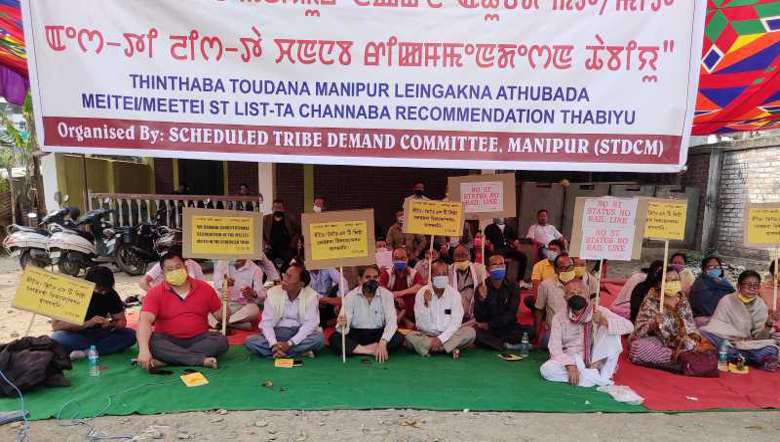 The Schedule Tribe Demand Committee, Manipur (STDCM) on Saturday staged a sit-in protest in Imphal, with the demand to include Meitei/Meetei community in the scheduled tribe list.

Condemning the state government for not fulfilling the demand to include Meitei/Meetei community in the scheduled tribe list, the protest was held at the Improvement Community Hall, Thangmeiband Lilashing Kongnangkhong

The committee had been demanding to enlist Meetei/Meitei community in the scheduled tribe category for the last many years, said Coordinating Body of STDCM convenor Laishram Romesh to the media on the sidelines of the protest.

Romesh said the movement was launched to deliver constitutional safeguards to the indigenous ethnic identity of the Meetei/Meetei community. Besides, it will also help in strengthening the relationship between other tribal communities of Manipur and the Meetei/Meitei community, he added.

The matter was discussed on the floor of the house in last year’s Manipur Assembly Session, he said, adding in that session on March 4, 2019, Chief Minister N Biren Singh gave the assurance to initiate the required process to include Meitei or Meetei in ST list.

“In last year’s session, the chief minister himself said that the matter of inclusion of Meitei/Meetei is a much-needed subject that needs serious consideration. And later assured to submit ethnographic and socio-economic status of Meitei or Meetei to the government of India so that the said community may get the status of ST,” he said.

Despite giving such commitment on the floor of the house and not taking any initiative by the state government till date in this regard is unfortunate, Romesh said.

Alleging the state government of irresponsibility, the committee will begin to carry out a sit-in protest at various parts of the state from today onwards, he said.

The committee will intensify agitations if the state government remains a mute spectator, he added.