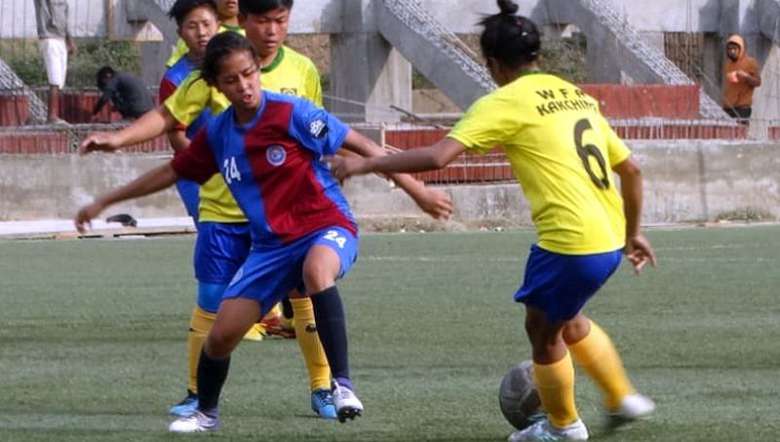 ESU Wangkhei took their time to settle down but halfway through the first half of the match, they unfurled their wings with Y Kiranbala Devi striking the first goal in the 21st minute of play and later I Prameshwori Devi adding another one in the 39th minute to make it 2 goals for the team.

ESU added more fire to its attack in the second half with I Prameshwori Devi fetching her second goal in the 47th minute and it was Th Umapati who netted home the fourth goal in the 60th minute to take complete grip of the game. ESU seasoned campaigner looked scoring easy when she fired home three quick goals in 66th, 71st and 78th minute to bring up her hat trick goal.

WFA Kakching had a hard time trying to break through the defense of the much experienced ESU team and had to toil hard throughout the game.

The lone goal for WFA Kakching was scored by Ch Julisha Devi in the dying moment of game in 80th minute, but it was not enough to save the team.

Meanwhile in the other match, YWC Langthabal drubbed AMMA FC Andro by 7-0 goal in a one-sided match affair. There was little resistance from AMMA team against the onslaught of YWC team with H Silky Devi scoring a hat trick while S Lynda Kom fetched two goals, S Thoibisana Devi and Y Laxmi Devi chipped in with a goal each. AMMA player Sh Anika Devi and Y Henthoi recieved a yellow card each in the match.