Dr Irungbam Deven, presently an associate professor of the department of Anatomy, RIMS, was named the winner of the Sahitya Akademi Award 2020 in Manipuri language for his poetry book ‘Malangbana Kari Hai’ 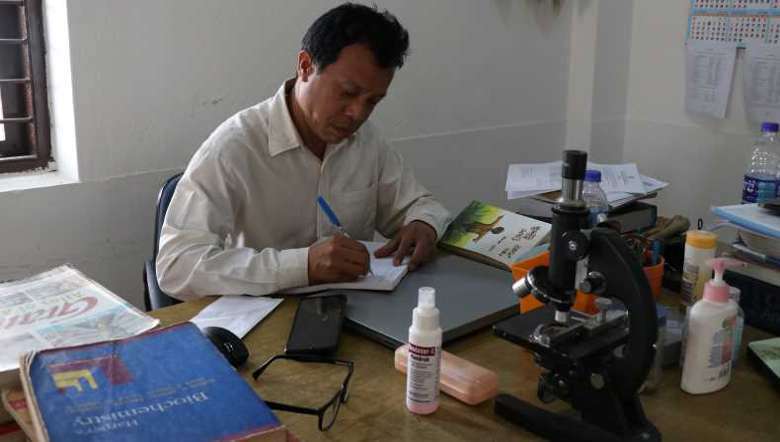 When the winners of Sahitya Akademi Award 2020 were announced on March 12, Dr Irungbam Deven was preparing a powerpoint presentation for his MBBS students at the Regional Institute of Medical Sciences (RIMS).

The news came in through friends who congratulated him on his success.

Dr Irungbam Deven, presently an associate professor of the department of Anatomy, RIMS, was named the winner of the Sahitya Akademi Award 2020 in Manipuri language for his poetry book ‘Malangbana Kari Hai’ after recommendation by a jury of three members namely Ibemhal Chanu (Arambam ongbi Memchoubi), N Tombi and Makhonmani Mongsaba.

“I have always loved writing and reading. I chose poetry among other forms for now because I feel it saves me time as I have to focus on teaching the students as well. Nevertheless, writing demands a lot of time. One cannot simply write. One has to read, attend seminars and other literary activities,” Deven said while speaking exclusively to the Imphal Free Press.

He never imagined himself winning such a prestigious award but was overjoyed on receiving the news, he said.

When asked how he manages between work and his passion for writing, Deven stated that he struggle at times as there is a vast difference between poetry or literature and the medical profession.

“I am serious in my profession and I love writing as well. Nevertheless, I sometimes even derived my themes from my experiences in the profession. I am slowly learning to adjust and maintain a balance. Mostly, it is at night time or while I am driving that ideas for poetry would come up. If possible, I would jot down and later rewrite according to my needs,” he said, adding that sometimes, he would finish a poem in one sitting and sometimes it takes a lot of time and some he even discarded as he didn't feel right about them.

Narrating how he started writing, he stated “I used to feel lonely and shy and I always use writing as a means to express myself. I had few poems published in school magazines as well.”

Deven, now 51, has published 10 poetry books so far of which the award winning Malangbana Kari Hai is the eighth one and all of them except his first one Mohini (1999) were published after joining RIMS in 2001.

As told by him, he used to work at Delhi’s RML Hospital for almost two years and after that as an MO of the mobile team of district leprosy control programme prior to joining RIMS.

Originally from Tentha in Thoubal district and now residing at Heirangoithong Awang Maibam Leikai in Imphal West, Deven completed high school from Tentha High School and PUC from DM College of Science and passed out MBBS from RIMS in 1992.

Deven also noted that many promising young writers and poets are coming up. However, the absence of publishers and writers or poets getting their works published by themselves or relatives is disheartening. It is as if writers are bound to struggle for being born in Manipur. Growth in the number of publishing houses in the state will alleviate the struggle of writers, he added.

He also said that there are lesser readers for poetry in Manipur compared to short stories or novels.

When asked about his favourite themes of writing, he said that even though he started out as a romantic poet, he is now exploring varied themes and subjects, including human nature and social issues among others. His writings also reflect the desire for a social change.

Despite his hectic schedule, Deven maintained that he will continue to write and revealed his plans to even expand his horizons through writing short stories as well.

Deven is currently living with his wife, parents, three children and one sister. He is living an exemplary life - how one can maintain a balance between work and passion successfully.